A place to keep us informed of the goings on in your tanks. - Tank Logs
Post Reply
338 posts

I added 8 Corydoras trilineatus (sold as julii, of course) to Sheba 2 yesterday and that, I think, completes the stocking of the Shebas for now.
Top

I took some video of Sheba 2 yesterday without any real intention of releasing it. However the colour-change in the female Improbability Fish since she's been in there illicitly is now quite marked (in comparison to her siblings in Sheba 3, below) so I thought I'd post it up for that reason ; it's only a minute long ...

Could the low balance of ammonia (with your pretty accurate readings) just be down to the fact that the "munchers/microblighters" have been producing their own waste perhaps?
I'm not sure I've ever seen anything about that and your test may be showing it?
Top

It's a bit of a puzzle, isn't it?! Especially so since sometimes ammonia falls to zero but most often it doesn't! There's stuff going on that's being hinted at for sure but it's testing the limits of my understanding (not at all a difficult thing for it to accomplish).

I can't dwell on it too long right now because Mrs. V! is champing at the bit to resume her Sims game but briefly ...

We know with an overwhelming degree of certainty that the chief/only ammonia-munching microblighters in the bucket are archaea. It seems now that archaea probably predominate in all mature aquariums, although bacteria seem usually to be the first colonists. Anyway ..

Back in 2011 I had contacted one of the team that published a paper revealing the presence of ammonia-oxidising archaea ('AOA' if you want to search) in aquarium filters. He was kind enough to reply and we had a short e-conversation. Among the volley of questions that I fired at him was the notion of nitrite-oxidising archaea (NOA). He didn't know ; but at the pH's involved he ventured that the likelihood that bacteria were agents of nitrite oxidation was vanishingly small. A faint possibility was that the biofilm somehow had a means of regulating pH within it.

Sometime during the course of ministering to the current bucket I figured I'd have another look to see if there's been any revelations about NOA in the nine elapsed years : zilch! (so far as I could see anyway). I made the assumption that they'd looked but hadn't found any and went from there. So ... if the disappearance of nitrite from my bucket was potentially not due to biology, it must perhaps be due to chemistry. Armed with that temporary assumption I went looking again and found ... this!

That was the "D'Oh!" moment that I referred to upthread. I need to read that article in full text. Oooh! I've just seen (while copying the link) that it's available for rent via DeepDyve. I get alerts from DD so maybe I can get it that way rather than pay £30+ to Springer!
Top

Incidentally : you may have noticed that I've recently been showing the Total Ammonia result to four decimal places instead of two. The machine returns results to two decimal places of the concentration of nitrogen in the ammonia (called 'ammonia-N') and that's multiplied by 1.214 to convert it to ammonia proper. Having done that I used to chop it back to two decimal places again. However It was pointed out to me elsewhere that I really should be recording the result in full, so I'm now doing that. I felt I had to explain because I was self-consciously feeling a bit of a psuedo!

Today I'll attempt to begin playing with dissolved oxygen and Clingfilm is at the ready! I'll fill the bucket almost to the brim - it should take only a litre or two to do that. So I'll then need to re-check the concentrations of ammonia and nitrite given by my 4 drops and forty drops respectively. I need to re-check the ammonia anyway, since having opened its bottle so many times recently will have reduced its concentration slightly. I'll withdraw the airlines but will keep the heater in and running. I'll have to devise a method of stirring it every so often without letting too much air in, and ditto a method of putting in/taking out samples if necessary. Actually I may just dose with ammonia and nitrite and leave it for three days before opening it up to check what's happened ; I should be able to re-seal it pretty quickly if I think I need to re-dose. Yes - I think that's probably the best plan.

Ah! (sorry, I'm thinking onto screen here!) I should dose first with nitrite only, of course! So I'll do that daily for three days, then open it up to check O2 etc., then dose with ammonia and nitrite and seal it up again for another three days.

I'll return again later to report on what I've managed to do.
Top

I withdrew the airlines, altered the position of the heater and taped its cable in place. For stirring I buried a length of 12mm hose in the alfagrog and attached a large syringe to the other end.

Dissolved oxygen was measured at 7.6mg/l - I took this photo for something to do while waiting for the probe's temperature to stabilise : 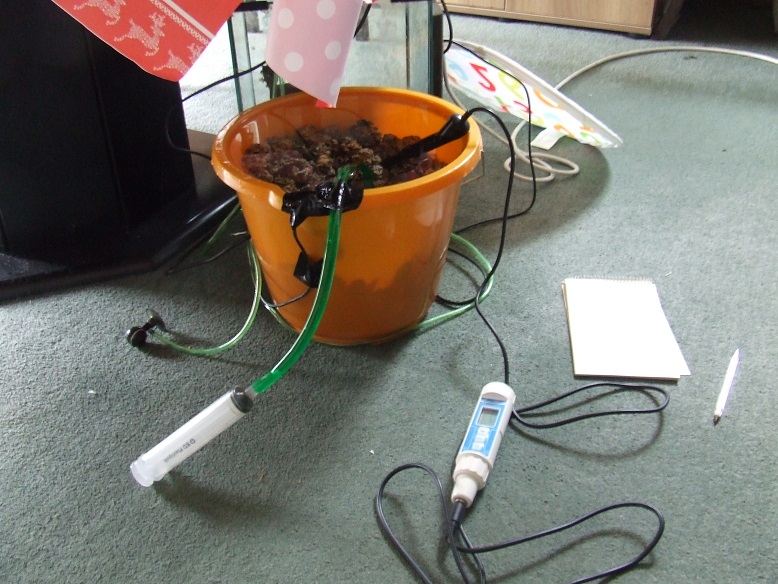 Then I added 40 drops of nitrite solution and did my best with the Clingfilm : 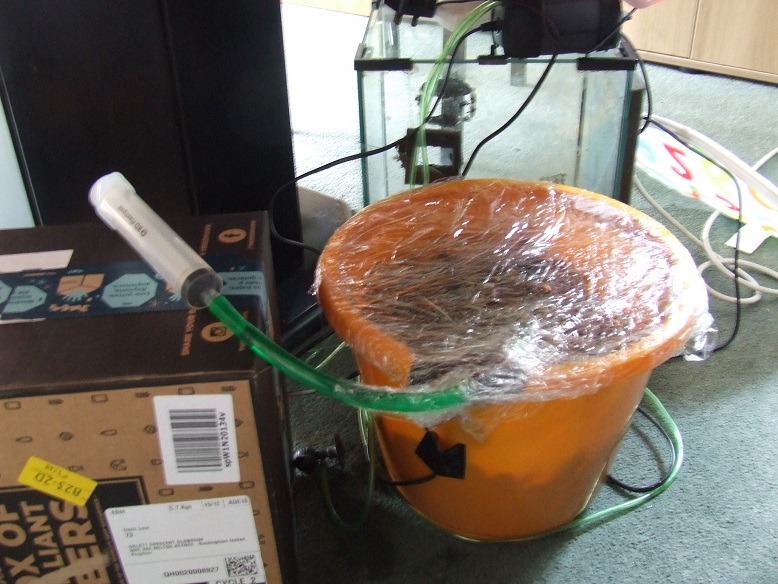 The Clingfilm is touching the water surface, which isn't ideal, but I couldn't figure out a way of holding it proud. Anyway, we'll see what happens, if anything.
Top

If you've read the lot in one sitting, PV, I'm truly in awe! I shall most certainly nominate you to receive a "Tolstoy" (awarded for achievements of unflagging determination in readership).

Universities might well enjoy a good laugh at such times as these : sadly that would be the only positive outcome of pointing this thread at them!