A place to keep us informed of the goings on in your tanks. - Tank Logs
Post Reply
324 posts

While waiting for a water-tweak to take effect (nearly there!) I thought I'd bring along some light relief. Thanks to Plankton I've made what could be a situation-rescuing discovery! ...

I reached into the cobwebbed murk of that part of my museum which is dedicated to culinary curation and pulled out a selection of exhibits :

From right-to-left : The chutney was re-bottled on 25/11/95 and it obviously needs doing again (it's quite edible).

The great news is that I've found two jars of both 2017 and 2019 marmalade lurking in the gloom! I therefore have considerable reason to rejoice and for optimism about the early part of 2021.

Glad to learn you still have proper marmalade.

I miss my Gran's marmalade, that was really chunky and still tasted like oranges rather than sugar, despite the amount of sugar necessary to make it work.
She used to make crab apple jelly as well........
Top

I re-dosed with a standard dose of ammonia solution plus a quadruple-dose of nitrite solution. Starting points for new run are : 1.54 ; and 0.595 respectively.

I didn't get round to Sheba 4 yesterday because the moment I'd got everything prepared it started hosing with rain. I thought: "Oh drat!" (or words to greater effect). I couldn't be bothered to shift into 'rain mode' so postponed again!

I suppose I have to finish the jar of MacKay's Vintage Dundee Orange Marmalade before attacking the newly-discovered treasure.
Top

I've had a seriously-disorientating morning thus far! Brain is frazzled and I'm not sure it's capable of coping with my plans for the rest of the day.

I woke up, now in Tier 4, to Mrs.V! trying to sort out arrangements that we had in place for Christmas. I suspect that she may be imposing a solution that nobody else wants, but also suspect that my intervening would make things far worse in terms of emotions etc.

Then I discovered we have what appears to be a smart squirrel - it had apparently worked out how to nick the peanut butter out of the trap without triggering its mechanism. Mrs. V! had watched it go halfway into the trap and emerge with the bait. As she reported this, I saw it sitting smugly on the back fence cleaning its whiskers. I will have to try to adjust the trap's sensitivity (there's a screw that enables that) without necessitating a trip to A&E - which is probably inaccessible at the moment anyway.

At last I was able to turn my attention to the bucket.

After dosing with ammonia and nitrite solutions yesterday, I had removed a small jar-full (jarfull? jarful? - I think I need Wishafish to come along and adjudicate again!) of bucket-water so that this morning I could test ammonia and nitrite and compare it with those parameters in the bucket. The plan was to get a rough idea of the action (if any) of the nitrifying microblighters (if any) that may be in suspension rather than adhered to surfaces.

At initial inspection this morning, there did appear to have been activity of some sort in the jar - whether physical, chemical or biological : 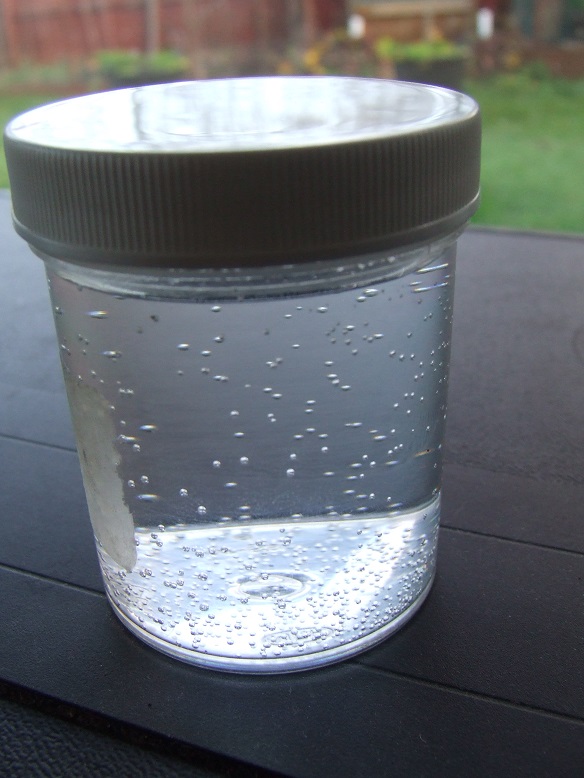 So I set about testing it. I'll say what I found ammonia/nitrite-wise in a second. After I'd done these tests I thought I'd better just check conductivity and pH in the jar. Conductivity was reported as 20.2uS (originally 267!) but even more puzzlingly, my multi-function meter refused to give me any sort of pH reading whatsoever (it's supposed to read the whole scale from 0-14). It refused to reset ; and refused to recalibrate. This instrument has been behaving perfectly for several months (earlier in the year I'd had to return two or three faulty replacement meters). In the end I gave up on pH and will see if Pass Ltd. will once again replace the meter ; either that or offer me favourable terms for returning to separate EC and pH meters. Anyway ..


I wanted to repeat the 'jar' exercise detailed above using roughly the same starting parameters so I added (at least one day prematurely) a standard dose of ammonia solution plus a quadruple-dose of nitrite solution. The starting points for this new run were 1.87mg/l and 0.597mg/l respectively. Conductivity was 275uS/cm before addition.

I refilled the jar with bucket-water and set it again on top of my Juwel Rio 240 to keep it from chilling overnight (temperature of the jar this morning was roughly 21C). We'll see what happens, if anything. I wonder what gas was in those bubbles in the jar this morning. Some sort of nitrogenous gas, if not nitrogen itself? CO2 bubbling out because of the change of temperature (roughly 5C)? There's not much else that I can imagine it might be - any other ideas, anyone?
Top

The smart squirrel isn't smart any more. I'll put the evidence in a spoiler in case queasy viewers may not wish to stumble across it! : 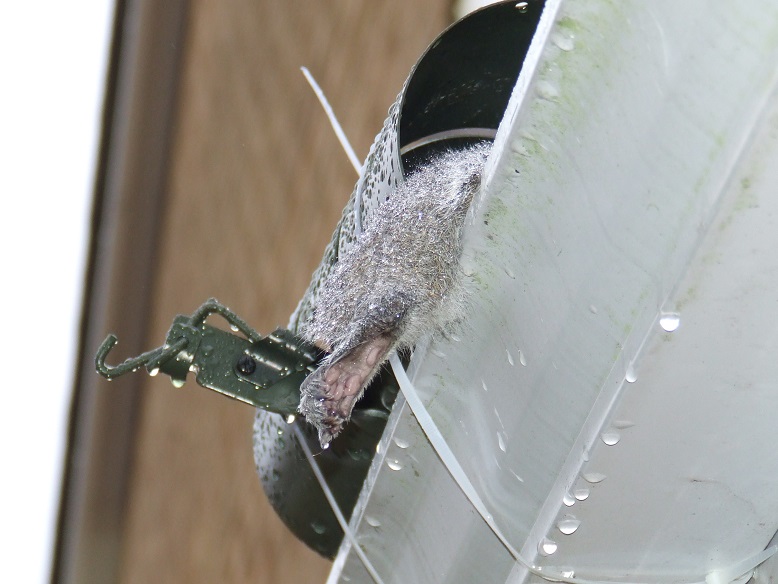 Pass Ltd. is sending me a replacement electrode(s) which should arrive tomorrow - we'll see if that provides a fix.

The jar this morning had few bubbles - those that were present were at the surface : 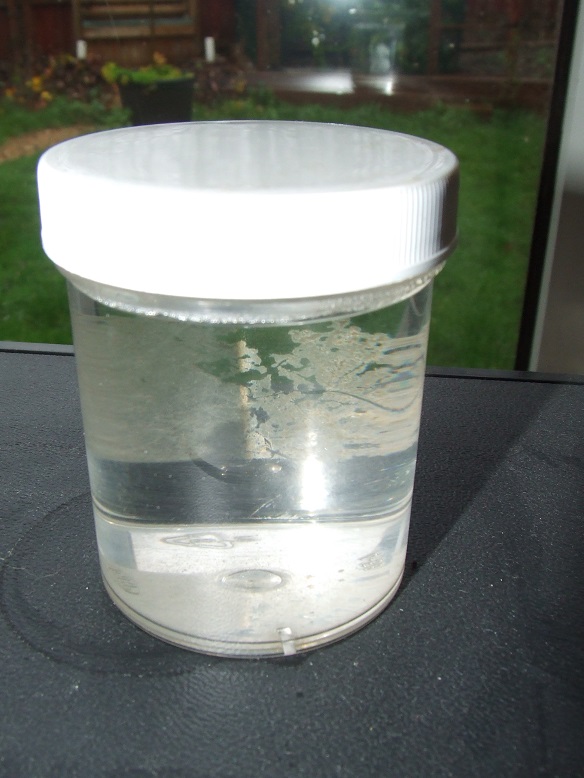 So definitely some nitrifying activity in the jar, but not nearly as spectacular as was supposed yesterday, so it could have been a mistake on my part. What's stopping me saying that it definitely was a mistake is that I didn't record (nor could I remember) whether or not the jar had been sealed tightly or whether I'd just laid the cover loosely on top. So I've refilled it with this morning's bucket-water and haven't screwed the lid down. I'll probably have to repeat tomorrow with the lid definitely screwed down!
Top

Operation Sheba 4 is 'on' at last!

I'm only here at the moment for something to do (other than the washing-up) while the water heats up. Rain-mode is engaged just in case : 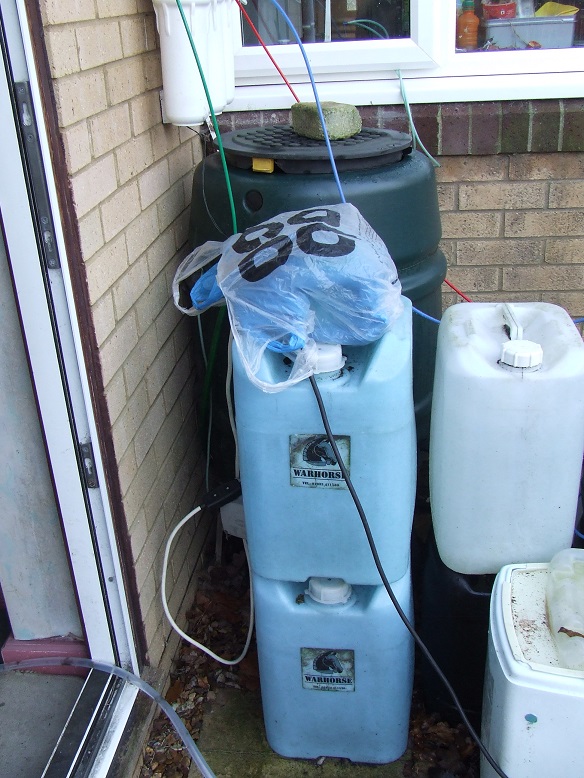 Inside, all is ready : 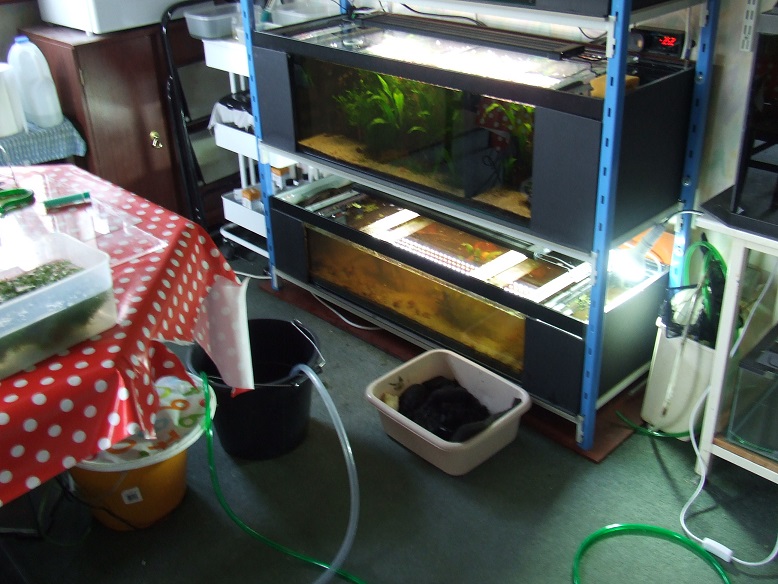 The Pencilfish have fled somewhere, but the Corys don't appear to be too perturbed ... yet ... : 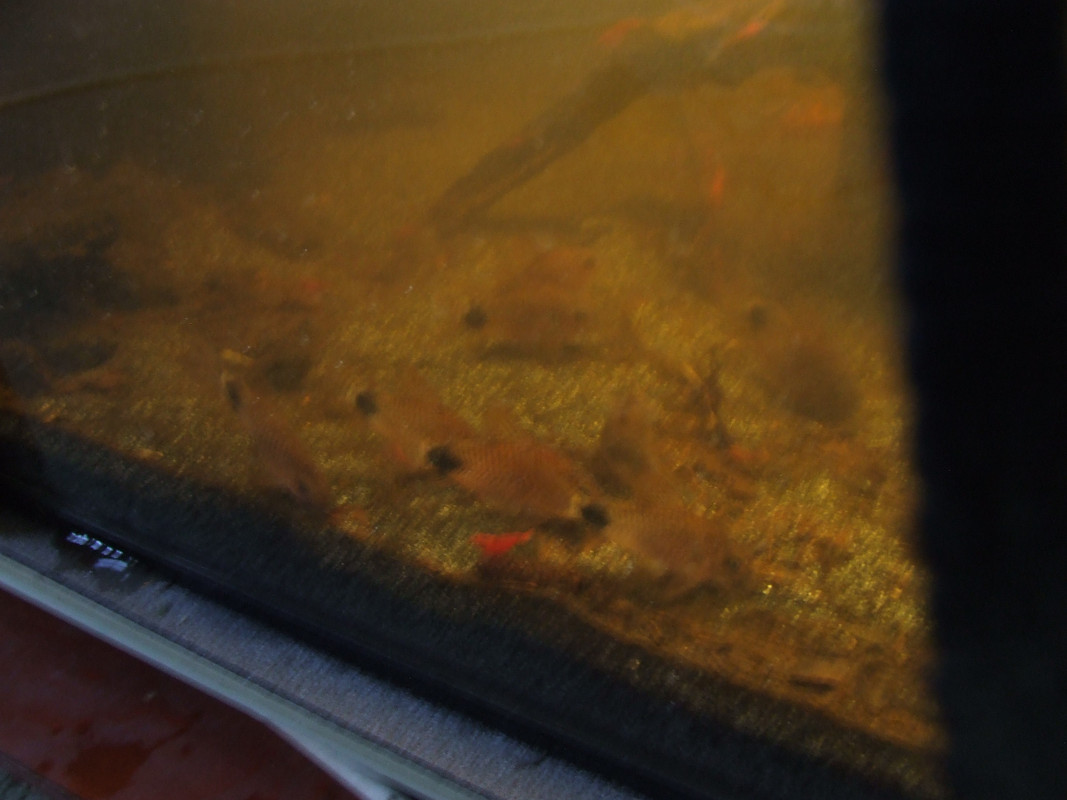 ... not that much can be seen of them at the moment ; it will get worse over the next hour or two.

I've removed much of the decor and washed it. I'd forgotten that I'd put a real Echinodorus in there and had pulled it half-out before I realised it wasn't one of the artificial plants.

Next report should be when it's all done.
Top