A place to keep us informed of the goings on in your tanks. - Tank Logs
Post Reply
324 posts

You're not going to believe this, but directly after I'd logged off earlier the power to all the sockets in the house went off! It's taken me till now to unplug/switch off everything one by one until the fuse thing stayed on. The culprit appeared to be the porch light outside. Anyway I'm keeping that off for the moment and will recycle the countown for Sheba 4 launch after I've had a bit of a break. Hopefully I've still gotvthe will to continue!
Top

Now that it's cleared a bit I can put a couple of pics up.

The Pencil fish have reappeared but they (I don't think) aren't in either of these fuzzies : 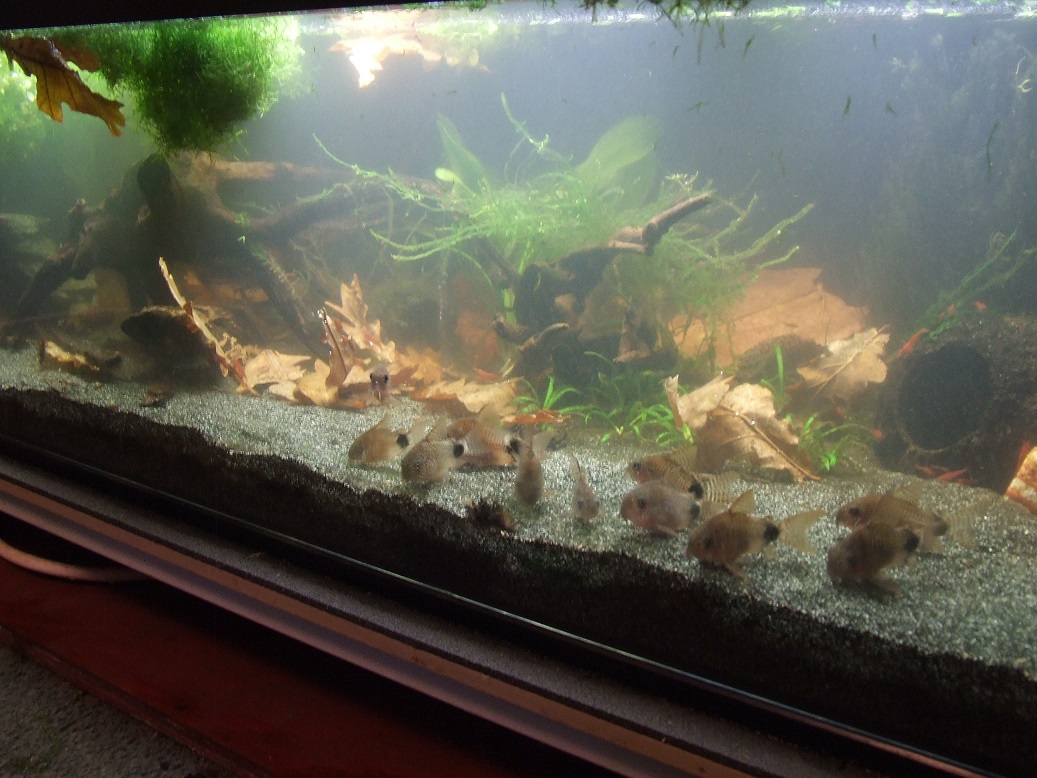 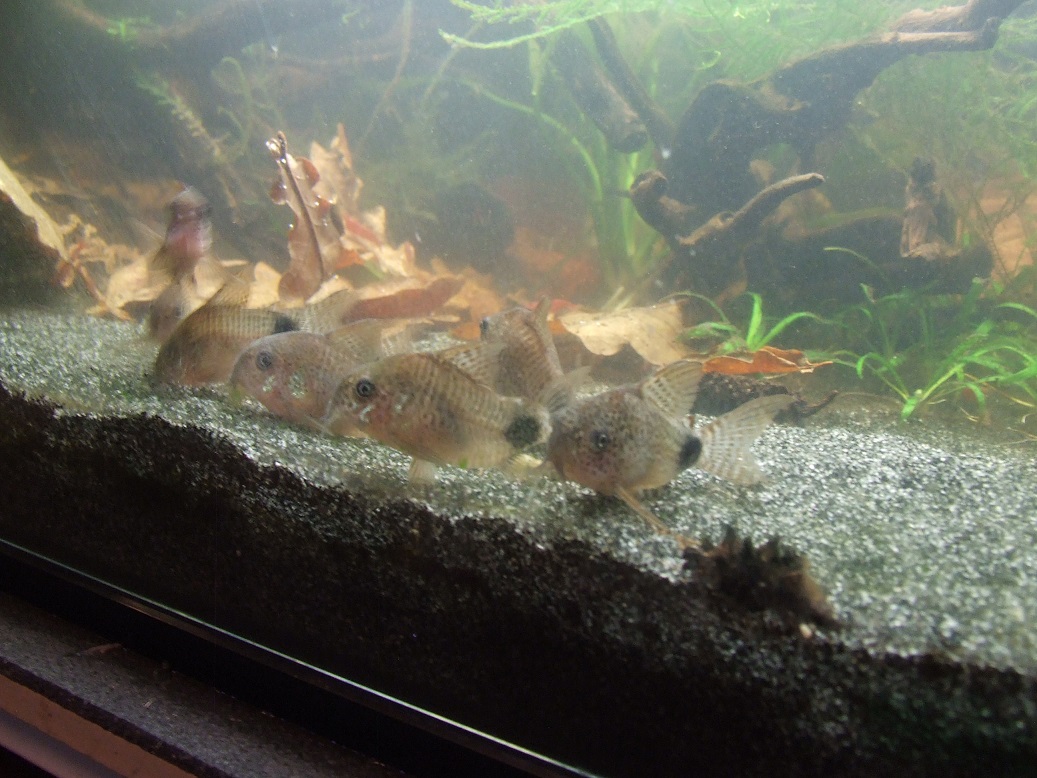 Anyway, new foam installed! I'll check ammonia in the morning and if necessary manage with Prime for a day or two, until it's convenient to release some alfagrog from the Famous Bucket.
Top

I don't know exactly, Att. They've been resident at Vale! Towers for only six months or so. Stephen will be able to add much more of their history, I'm sure.
Top

New pH/EC electrode supposed to arriving between 3 and four this arvo ; if it works I'll add the reading to the above.


The jar (with its loose lid) had no bubbles this morning. Ammonia content hadn't changed (at 0.88mg/l) ; nitrite had ostensibly increased (by 0.005mg/l) - but any of these small deviations can be due to one larger or smaller drop of sample than usual! I've reset the jar with tightly-shut lid.

No further bucket action today other than the pH thing.
Top

Most of the Corydoras caudimaculatus were purchased in March 2019 and some wild caught Corydoras caudimaculatus were added in May 2020.
They were quite small when purchased.
Vale! has had them for around 5 months (since July 16, 2020).
Beautiful fish.
6 foot (550L) - Rio Ucayali themed
9 x juvenile Biotodoma Cupido, 54 x Paracheirodon innesi, 23 x Thayeria boehlkei, 29 x Gold Laser Cory (CW010), 2 x Flash pleco (L204) named George & Mildred

* New electrode unit fitted to meter. I'm not totally convinced that everything is again hunky-dory. I've asked Pass Ltd. to check something for me (shalln't bore you with the details) but I suspect both pH and conductivity might be over-reading slightly.


My 'fish room' is gradually being tidied in preparation for its use as a pop-up Christmas restaurant. As you can see from the following fuzzy of it performing its duty as a testing station, bits of the table are reappearing as clutter is removed : 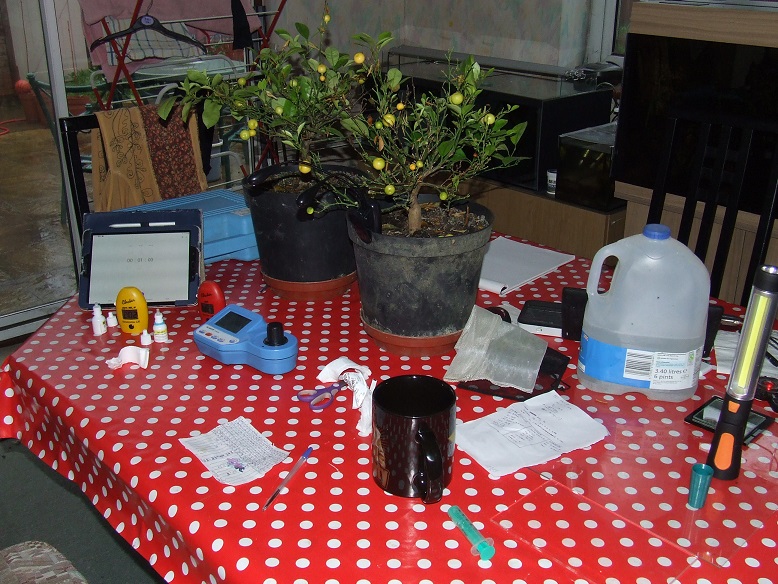 After testing I removed 1.25Kg of the wet-but-drained alfagrog from the bucket, representing 25% of its alfagrog content. For some reason I measured its volume : 800cc almost dead-on. I replaced that volume with RO/DI and added a standard dose of ammonia and a quadruple-dose of nitrite solutions. Starting points for this new run were 1.38mg/l and 0.598mg/l respectively.

The extracted alfagrog was divided between two media nets ; one went into Sheba 2 and the other into Sheba 4.


It was then time to move the bucket out from under the feet of future diners : I set a timer for five minutes and escorted it through to the playroom along with its heater, air-pump and the nano tank that raises the air pump above the bucket: 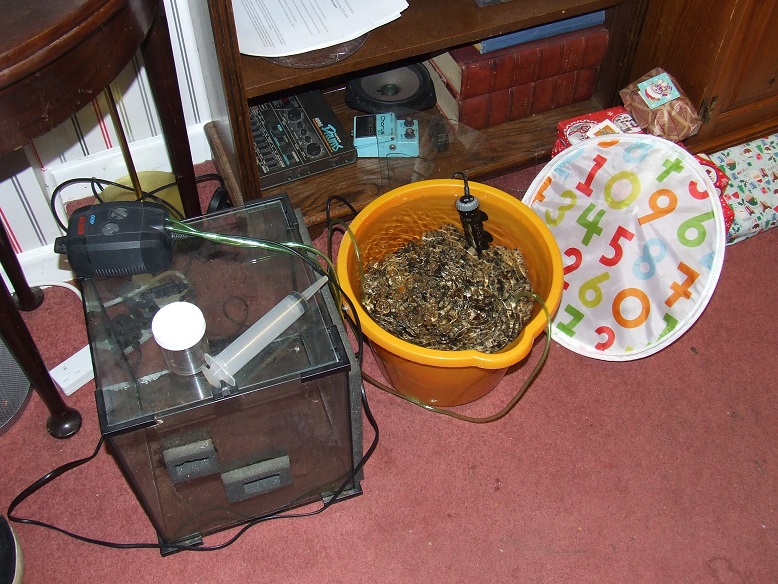 When the timer shouted, I did a 'grab' test : Total Ammonia 'grab' was c12% ; nitrite 'grab' was negligible or non-existent.


The jar (tight-lidded) had developed no bubbles at all overnight, so I didn't test it. I've refilled it with 'new run' water and screwed the lid tight.


No bubbles in the jar this morning. I tested Total Ammonia to be 0.78mg/l (compared with 0.80 in-bucket). Interesting! I have reset the jar with today's bucket-water and have left the lid loose. Tomorrow after testing I will add a bonus dollop of nitrite and see what may happen bubble-wise. The jar could just be gaslightling me, somewhat literally, of course! I'm running a bit low on sachets of nitrite test powder - maybe ten left at most.

No bubbles in the jar again. It's becoming a bit of a point of honour to see if I can replicate the conditions where bubbles did appear!

Total Ammonia in the jar was 0.74mg/l, whereas that in the bucket had fallen to 0.24 ; a bit different from yesterday morning's tests which had revealed more-or-less equal ammonia-munching between the two! Nitrite in the jar had fallen to 0.004, whereas that in the bucket had risen to 0.012 from its 0.004 of yesterday . It's all a bit puzzling at the moment!

Anyway, I reset the jar with today's bucket-water and have added an extra dollop of nitrite (not measured - it was just what had clung to the sides of the syringe after it was filled and emptied).

After a couple of days squirrel-free, one came this morning to pick up its Christmas present of chunky peanut butter. It didn't leave with it.
Top
Post Reply
324 posts