A place to keep us informed of the goings on in your tanks. - Tank Logs
Post Reply
323 posts

Can I request a maths check, please? Calling anyone with numerical skills who is sober enough to address this!

I need to recalculate the new concentrations of total ammonia given by my dosing following the removal of 25% of the alfagrog in the bucket and replacing the lost volume with RO. I thought I might be able to get away with not wrestling with the numbers, but now realise I have to if I want to keep tracking the 'grab' phenomenon occasionally! So...

So a standard dose of ammonia now creates 1.38mg/l in-bucket.


[Edit : while awaiting judgement on the above, I've directly-measured the quadruple-dose nitrite concentration using twenty drops in 4.5L of RO. It's 0.591mg/l. So I'll go back over the numbers for the last few days and make the necessary adjustments]
Top

I started a new run with standard dose of ammonia and a quadruple-dose of nitrite solutions. Starting points are 1.38mg/l and 0.593mg/l respectively.

At the same time I refilled the jar (no bubbles again overnight). Looking again at the photo I put up of the jar-with-bubbles (20th December), I think I'd screwed the lid down the day before ; so I did that again today.

It would be 1.39mg/l, if you round up, and depending on the accuracy your aiming for

So a standard dose of ammonia now creates 1.38mg/l in-bucket.

Thanks, both, for the number-crunching. 7
Top

A huge bite, relative to previous runs, taken from total ammonia overnight. It's not chuffing going to slow down/stop, is it?!

In the jar there were no bubbles. However, from a starting point yesterday of 0.88mg/l, total ammonia measured 0.91mg/l this morning. That's probably a sample-measuring error and no ammonia-munching had happened at all ; but given what happened at the beginning of the previous run (ammonia-munching in jar and bucket were roughly comparable) this is extremely puzzling! After I've got a few more measurements I'll review the jar's behaviour and try to make some sense out of it! Nitrite in the jar tested at 0.548mg/l this morning from a starting point yesterday of 0.593mg/l. At some point I will recharge the jar and include a piece of alfagrog from the bucket.

I refilled the jar (washed in RO/DI as per usual) with bucket-water and screwed the lid down.

I added a standard dose of ammonia (now taken to be 1.39mg/l) plus a quadruple-dose of nitrite to the bucket. Starting points for this new run were : 1.42mg/l ; and 0.583mg/l respectively.

I then refilled the jar with 'grabbed' water, introduced a piece of alfagrog and screwed the lid tight : 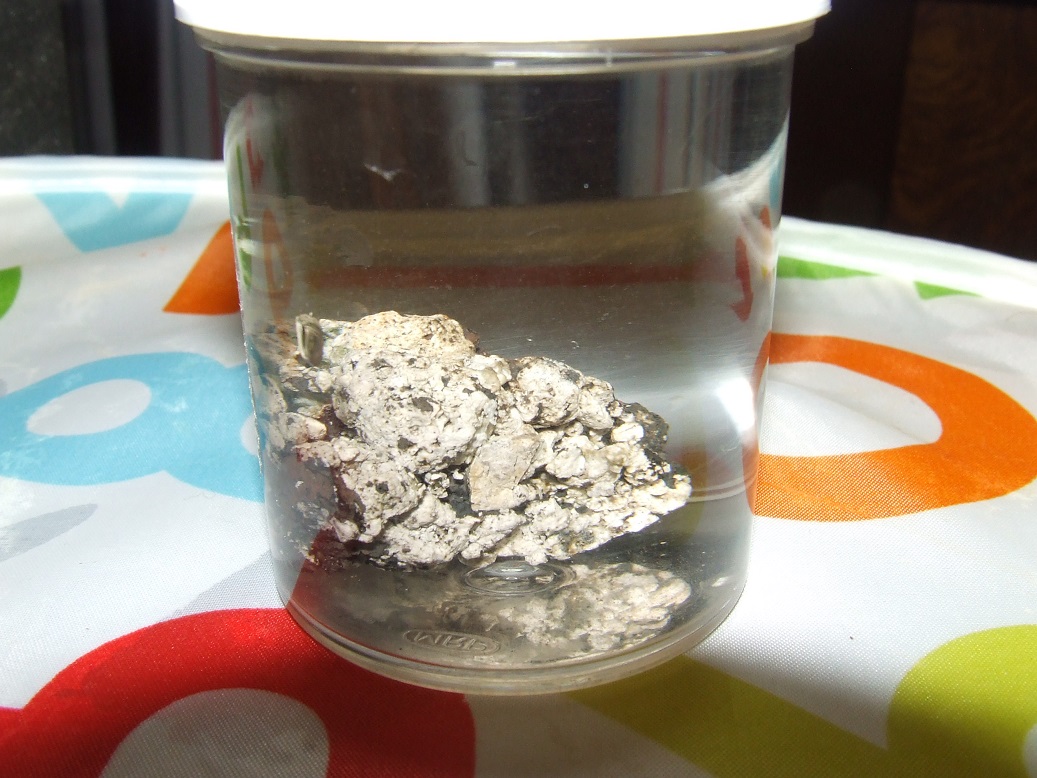 I have two nitrite reagent sachets left! Hanna are usually spot-on with their next-day deliveries, so I should be OK.

No bubbles in the jar. Total ammonia in the jar was 1.00mg/l (starting from 1.34 yesterday). Having extracted the 10ml for the test I replaced the lid (screwed down).

Puzzled why I'd heard nothing further from Hanna, I had earlier checked their website : closed until January 4th ; orders submitted after 22nd December will be dispatched on 5th! Bloody Twixmas! So I didn't test the jar for nitrite, reserving my last sachet of reagent for tomorrow's bucket. In the meantime I'll try to find some sort of a workaround.

Nitrite in the bucket this morning was 0.005mg/l according to my little device.

So I scooted off to Maidenhead Aquatics as soon afterwards as I could and picked up one of their 'Aquacare' nitrite test kits. It uses 5mls of sample and five drops of reagent, with a 2-minute reaction time. The reacted sample is pink, just like my usual test.

My test uses 10mls of sample and a sachet of reagent powder, with a 15-minute reaction time.

I put 10mls of sample and 10 drops of Aquacare reagent into the vial and pressed 'go'.

Fifteen minutes later : 0.005mg/l. So although the solution's not ideal, the Twixmas crisis seems to be averted for now!
Top

I reset the bucket to begin a new run. Starting points were 1.42mg/l for ammonia and 0.535mg/l for nitrite.

A 'grab' test after five minutes claimed : 1.42mg/l for ammonia (so no 'grab' at all). I used the hybrid test (Aquacare reagents and a Hanna device) which claimed 0.291mg/l ; however, the colour of the reacted sample best matched c5mg/l against the Aquacare colour chart. So it looks like the higher the nitrite concentration, the more unreliable is the hybrid method!

I returned the piece of alfagrog to the bucket and chose another piece of equivalent size. I had previously cleaned the business end of a pair of pliers as scrupulously as I could, and used it to crush the new piece of alfagrog into smaller pieces before filling the jar with 'grabbed' water and leaving the lid loose. This is it after having sat for fifteen minutes : 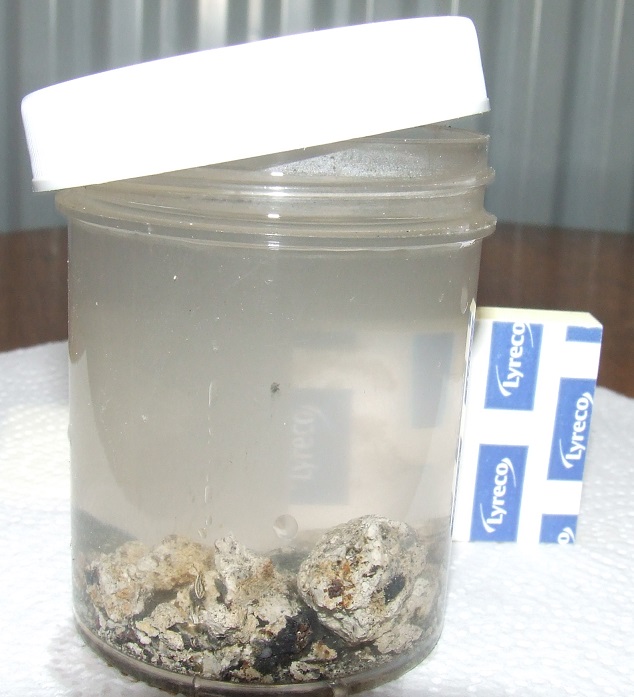 I guess some/most/all of the cloudiness is due to alfagrog 'dust' ; but we'll maybe know a bit better tomorrow.