A place to keep us informed of the goings on in your tanks. - Tank Logs
Post Reply
50 posts

I think your tank looks more natural with the algae growing on the wood.
Top


He speaks for himself.


He speaks for himself.

Big tank came about as I had my eye on Blue Rainbows for some time, and to a lesser extent Scissortails, also had (could create) some space along the back wall opposite the French doors,

I went for a Jewel Rio 350l it's 'only' 4ft long but is quite deep, I have to say I was a bit concerned about reaching the bottom but now the substrate is in I can just about manage if I stand on a dining room chair, luckily I don't need to very often, it's a bit cold at the moment to be up to my armpits in a tank! Especially as I run mine sub tropical at about 22c, this wasn't something originally planned on, rather I ended up with this temperature by simple trial and error over a period of time, it seemed to work well for me so I have stuck with it,

I have to say despite my initial worries over lack of time for maintenance of a big tank, that on the whole looking after it has been a breeze, it takes no more of my time than the smaller one, although it takes longer to change the water I don't have the same problems with algae or not to the same extent so that saves time, and if I need to I can leave this one longer between water changes,

The wall it's on is actually 5ft but couldn't use all of the space due to practicalities like getting to plug sockets and opening the lounge door, it's a little different to the other tank which is nice, also like that as I walk into the lounge I can see down the length of the tank through the short side 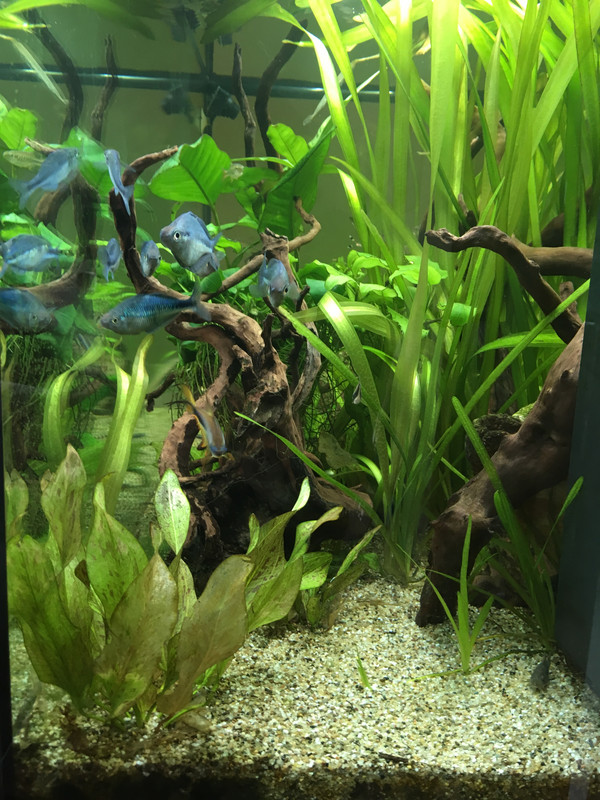 Here is a front on view, the wood on RH side with Anubis is only there temporary to get cleaned it usually resides in the other tank
I thought I'd had this tank 18 months but when I checked turns out it's now been 2years

Where does the time go?
Blue Rainbows seem happy and it's big enough for them, but I have due to the fact they love swimming lengths up and down the tank I have decided when I am able I will be getting a longer/ thinner tank for them but this is a plan for the future, it may be a while before I can act on it, in the meantime it gives me some time to save up 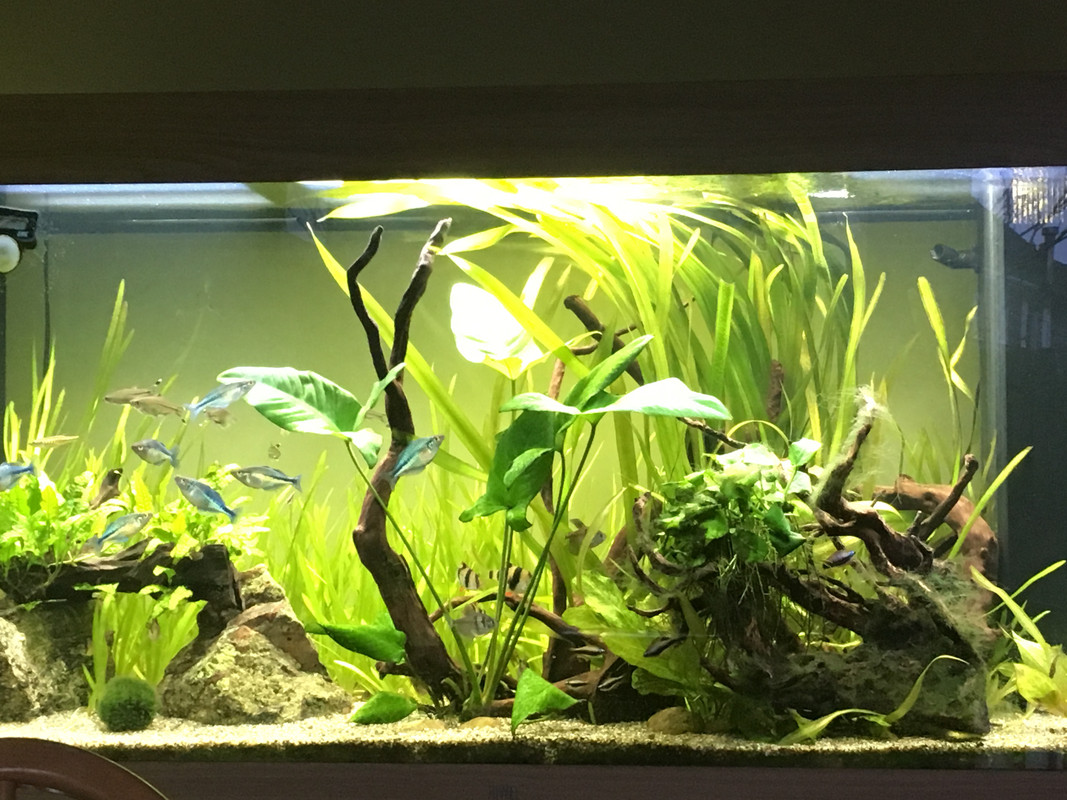 Yes I didn't appreciate their need for this when I bought the tank was mostly just thinking in terms of litres/ handy available space, still they are happy enough in there for the time being, if I go ahead with the longer tank they will surely be the most expensive rainbows ever purchased!

I also have a pair of Boesemans in the smaller tank they don't seem to have the same need for swimming space though possibly that might change if they get large, they are also great fish but don't trump the Blues in my opinion

I find it strange that the blue rainbows are doing ok at only 22C all the time, that's definitely the lowest range for Lake Kutubu, although it only goes up to 25C.
Top

Thanks @plankton they seem to be ok should think they have been in there 18 months or so, I've had a few losses from the tank, not many, and none from the rainbows, long may it continue (fingers crossed) they seem active and happy, nothing more frustrating than loosing a fish,
I have been taking some photo's over the last couple of days of the 180 tank so I'll post a few of those up now, any excuse to stay inside out of the cold