This was taken an hour or so ago : activity seems to have slowed a bit since then.

It's 3m50s in total ; the curious bit is at around 2:40 - talk about desperation! (if what's happening is what I think is happening).


It'll be interesting to see if anything comes out of it (as it were).


[Edit : looking at it again, maybe that's what's supposed to happen? I don't know - these are the first Bettas I've ever kept}
Top

I've never seen bettas spawn as many times as that! He certainly made sure he'd worn her out by 2:40, she had to take some time out to recover!

I thought he’d killed her for a minute

Fascinating, must be a very happy pair

Nice to capture the activity

I'd forgotten to include the pic that I took to show whereabouts in the tank this was happening, so I'll correct that now :

The female's lurking hole is below the construction site and slightly to the left. Whereas the male is nearly always visible she tends to dart out at feeding time, grab something and dart back again. I haven't worked out the logistics of adding food and operating a camera to take a pic during the microsecond or two that she's available!

A pre-lights-out inspection last night revealed that more work had been done : an impressive pile of bubbles had been constructed against the front pane of the tank ; and an Echinodorus runner had been detached and dragged over to the nesting site. It was too dark to take a pic, so I thought 'I'll do it in the morning'. Of course, this morning most of the bubbles had gone! 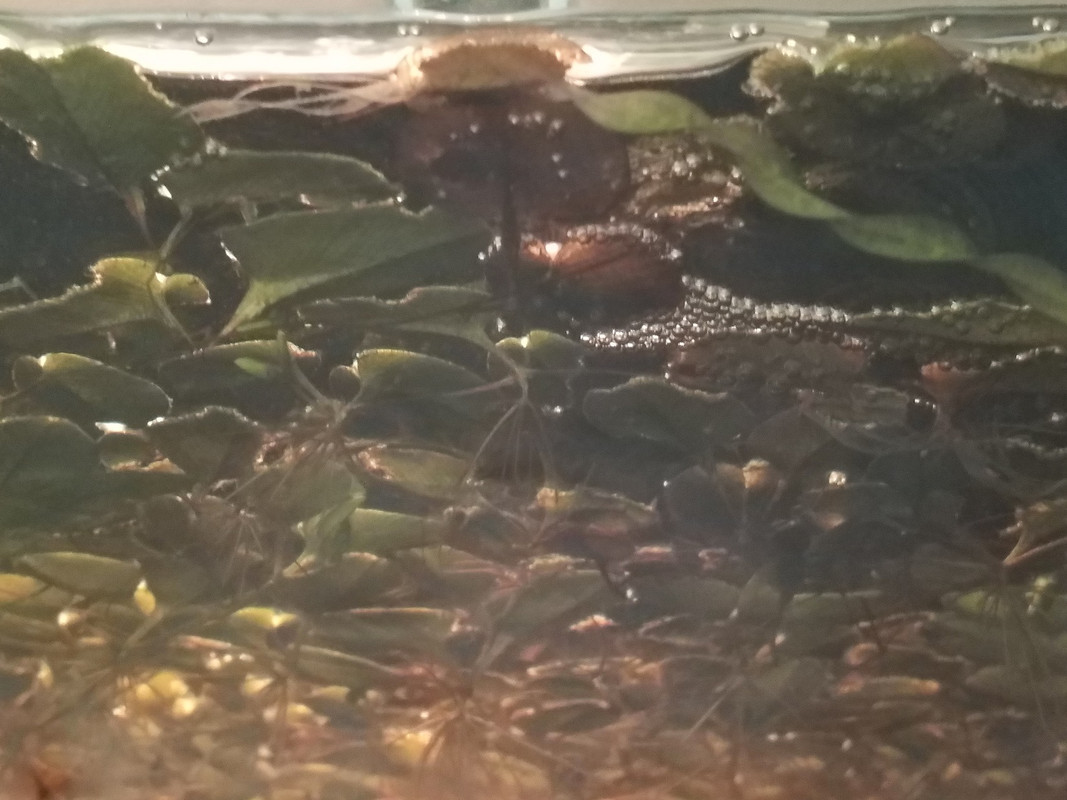 Anyway, irrespective of whether or not anything hatches, I'm content that they seem content with the environment.
Top

For the last couple of days it's been the female who has been patrolling the tank, following me to and fro as I pass ; the male has been nowhere to be seen. A complete reversal of behaviour!

I figured that he might have somehow got access to his beloved filter compartment, so I took the cover off and looked. Yes - there he was. He must have jumped over the top of the screen even though I'd tried to minimise the available gap. Anyway I gave him a couple of whiteworms and told him I'd deal with him tomorrow.

For some reason a Petula Clark song appeared as an earworm with the beginnings of an altered lyric :

"The other tank's water is so much blacker
Mosquitos lay on the other side ..."

(You have to be of a certain age, really)


If you see Nurse, can you tell her I need it early tonight?
Top

They just don't forget do they?

I have been engaged in a battle of wits and guile with the wee sleekit timorous beastie. It took all afternoon. When it was done, it wasn't entirely clear which one of us is further up the evolutionary ladder.

It began serenely enough but collapsed quickly into farce.

I removed the cover and we exchanged greetings. I fancied there was a strange look in his eyes. I went to fetch a net and returned : no fish. I put my hand in and wiggled it around : no fish. I removed the loose pieces of filter foam and fetched a torch : no fish. I rigged up a bright desk light and shone it in : quite definitely no fish.

A rummage through the tank proper ensued, with the female supervising. Nothing. Maybe he jumped out while I was getting tooled-up? I searched behind the rack and on the floor in gradually larger circles. Nope. Further inspection of the filter compartment, just in case: not there.

While I thought, I adjusted the foam sheet downwards, and one of the pair of pastic dividers upwards, to improve security still further ; then replaced the filter foam and cover. Then it dawned on me that I should check the pump/heater compartment at the other end of the tank. There he was!

The greater difficulty in the left-hand pump/heater compartment is that if contains a pump and a heater, with associated cables, a three-way valve and a water-change hose. And a bag of peat and a load of fine floss. Unsurprisingly, he vanished amongst all the clutter.

So I started the whole process again. When I'd removed the bag and the floss the re-rigged desk lamp showed his tail poking out of and wriggling through (what I later found to be) the tiniest gap that you could imagine between the bottom edge of the foam sheet and the glass 'batten' that the divider assembly sits on. You couldn't get a soggy cigarette paper through it.

He didn't come out the other side! Baffled, I disassembled the divider and lifted its foam up. He'd parked himself resolutely in the glass groove that retains the divider plates (which in turn hold the foam between them). He refused to be spooked into moving by a violently-wiggling hand, and I didn't want to risk injuring him with any sort of instrument. So I took a break intending that on my return I would use the element of surprise to shock him - either into the tank or back into the compartment.

On my return : no fish. So he'd gone back into the tank of his own volition, then? No - a fingertip search didn't flush him from cover. I deconstructed the right-hand compartment again but he wasn't there. I repeated the inspection of floor and behind tank. Rechecked both compartments but no show.

Eventually I put everything back together, paying attention to the tiny gap, and resolved to try again tomorrow. A few minutes ago I passed the tank to gather bits and pieces that I need at feeding-time : 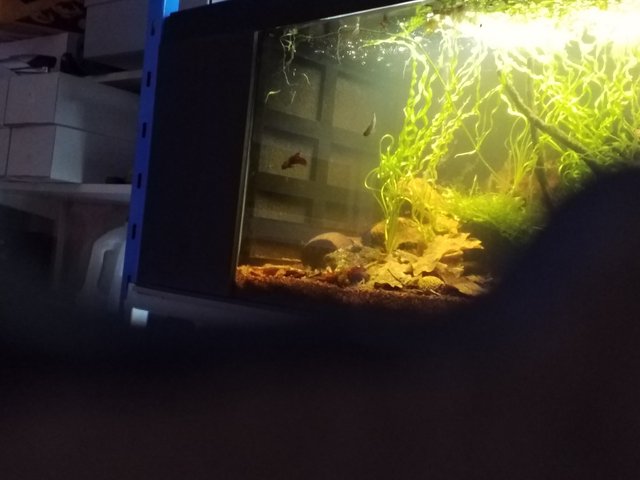 He's got that look in his eyes again ...
Top