Two years ago I was fortunate to go on the holiday of a lifetime, whale watching and reef snorkelling in the Maldives. I came back home full of ideas for a new, 400-litre (ish) salty tank that would recreate a few cameos that I had seen on the reef. I did quite a lot of research and settled on a concept and a stock list of corals and fish that were available and practical to keep, while being accurate for the shallower parts of the Maldivian atoll reefs.

Then I started adding up how much it would all cost and realised that it would be more expensive than another trip to the Maldives! So I made the decision to book the holiday again instead, and to take a decent underwater camera this time. I got back home this morning, once again keen for a Maldivian tank but knowing the cost will be prohibitive. So I thought I'd post a few of my photos from the real Maldivian reef biotope instead.

I am still wondering if I could do something on a smaller scale for a more sensible price; I do quite fancy trying the SPS challenge again and I've got more experience now and have a slightly better idea of the equipment needed and what can go wrong.

To start off, one of my favourite salty creatures and not one that I could realistically keep in a reef tank: Octopus vulgaris. I found this one in a fairly shallow area of an island house-reef. It was living in a hole in the rocks, and had a half-coconut shell that it used as a door to the hole, pulling it into place when it went right down inside. 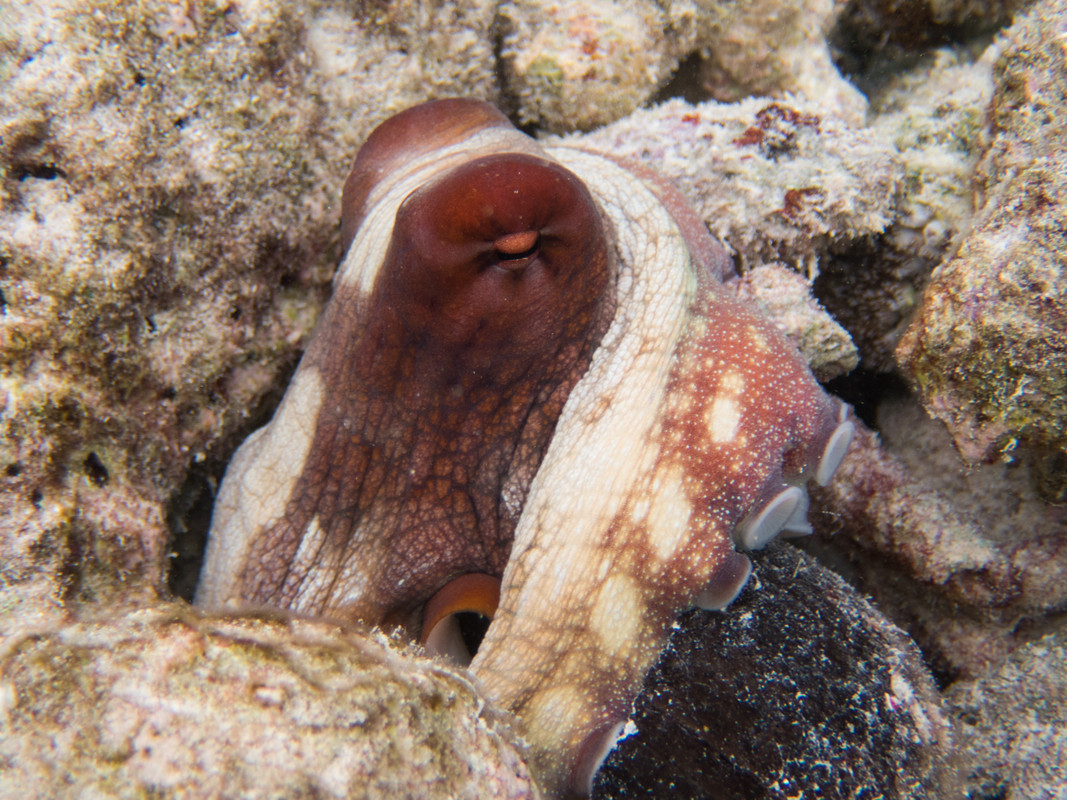 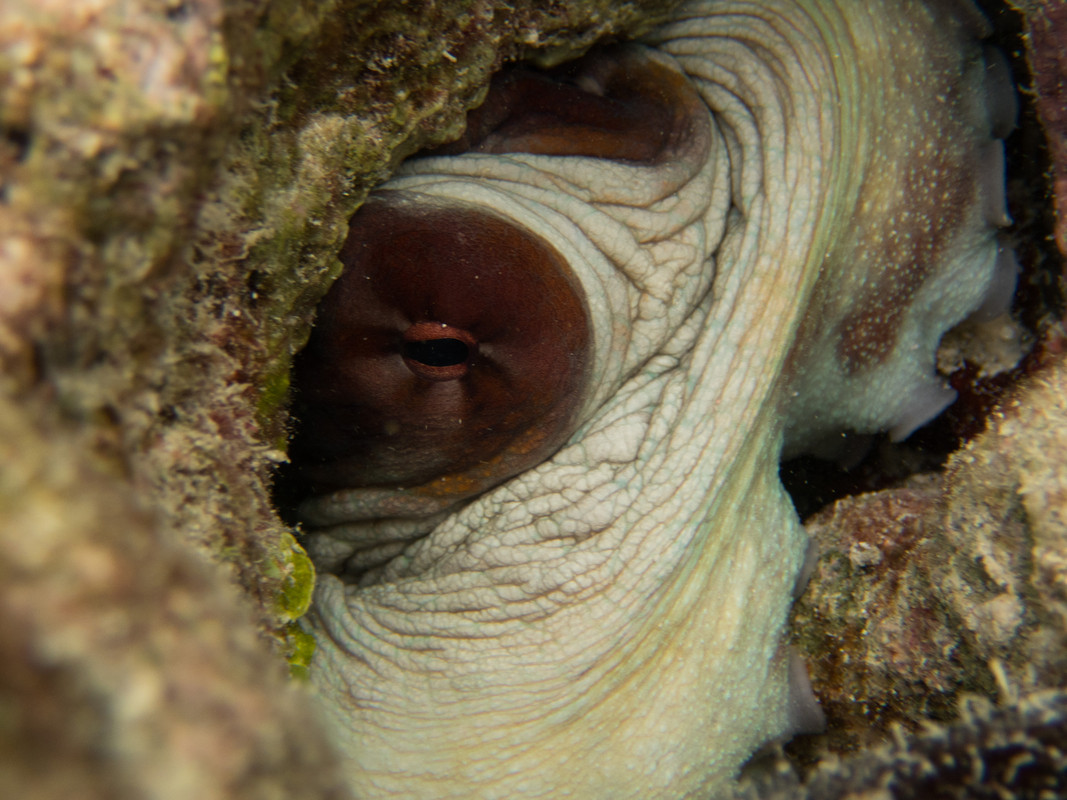 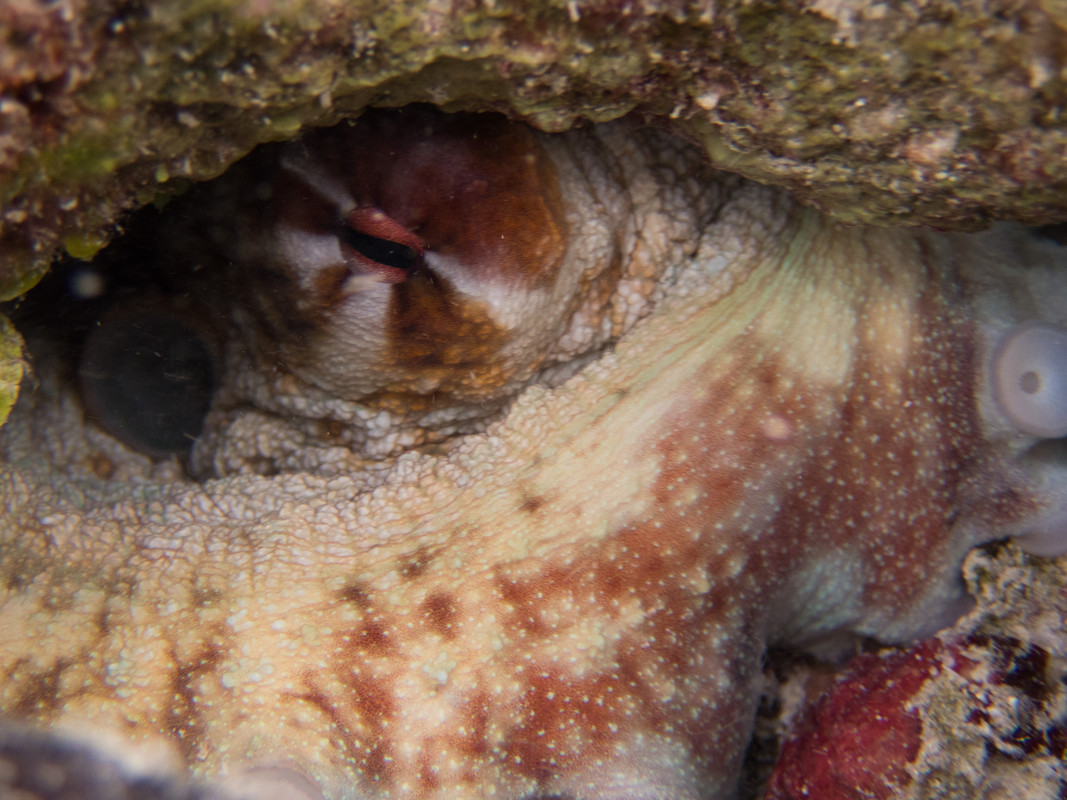 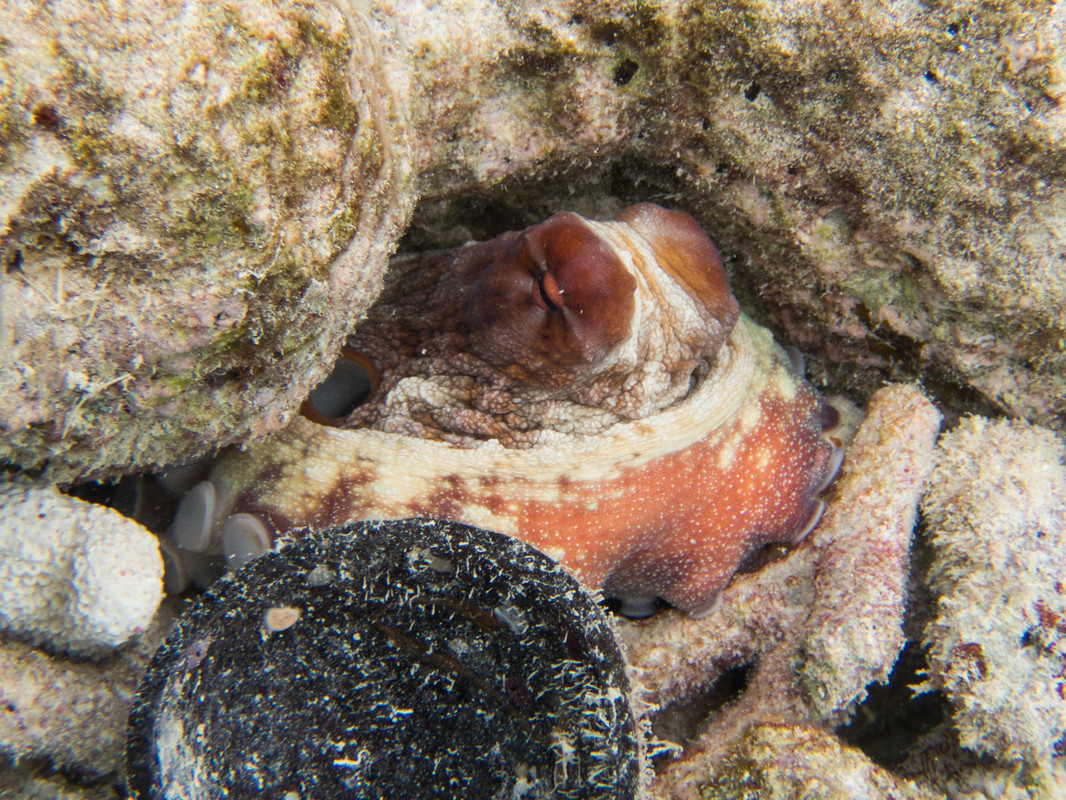 I'll add more gradually as it will take me ages to work through processing them all. Please tell me to stop when you're bored of them!
Top

Hello! I remember that holiday!!
Top

Glad you had a great holiday Paul.
Some interesting photos.
Top

Sounds like an amazing holiday!!! What about the flex nano marine tanks? somewhere will have a Black Friday deal, swell, all pond solutions & pond planet have had them on all week & Maidenhead is today (last night for members)

Two holidays of a lifetime, eh?
Rail stuff obviously pays way too much!

Glad you enjoyed and brought back more photies.

Jen1981 wrote: ↑
Fri Nov 29, 2019 7:28 am
Sounds like an amazing holiday!!! What about the flex nano marine tanks? somewhere will have a Black Friday deal, swell, all pond solutions & pond planet have had them on all week & Maidenhead is today (last night for members)

You're right, there are some good deals out there - thanks for the reminder!
My current salty tank is a 40L nano, which works well for soft corals and a couple of small fish, but in that size I cannot maintain the parameters for SPS.
My previous medium-size salty tank was 120L, which used an internal skimmer and external filter and dosing pump, but had no sump. That was a significant limitation. I've still got the tank and equipment (out of use) and some of it (including the dosing pump and the gyre wavemaker) could be re-used on a new project. I also have facilities for mixing my own saltwater (RO/DI supply and mixing drum on wheels).

I think for my Maldivian ideas I would need a sumped tank of at least 200L. If I scaled down my ambitions to a 600mm cube or a 900x500mm instead of my 2017 ideas of a 1200mmx600mm, the price might be a bit more attainable. For example, this 900x500mm looks like a nice option from my LFS at a good price with an additional 10% discount this weekend which brings the price below that normally charged for the 600mm cube:
https://urmstonaquatics.com/evolution-a ... -900s.html

I definitely have some thinking to do! Of course, the tank is not the only cost! Significant other costs include decent lighting, skimmer and pump. Of those, the lighting is likely to be the biggest hit financially, and would probably cost more than the tank. Does anyone have tips on decent cost-effective marine LED lighting? Technology moves on so fast these days and my research a few years ago is certainly out of date.
Top

The Maldives reefs suffered a severe belaching event in 2016, so when I visited in 2017 many of the corals were dead. A few of the hardier corals were still thriving, particularly the massive Porites and a few other types. Happily, in 2019 there are widespread signs of re-growth with many new colonies often around 100-300mm across. In some places the reef looks a bit like a newly-established aquarium with lots of frags stuck to the bare rock!

Here are a few examples of the coral re-growth. 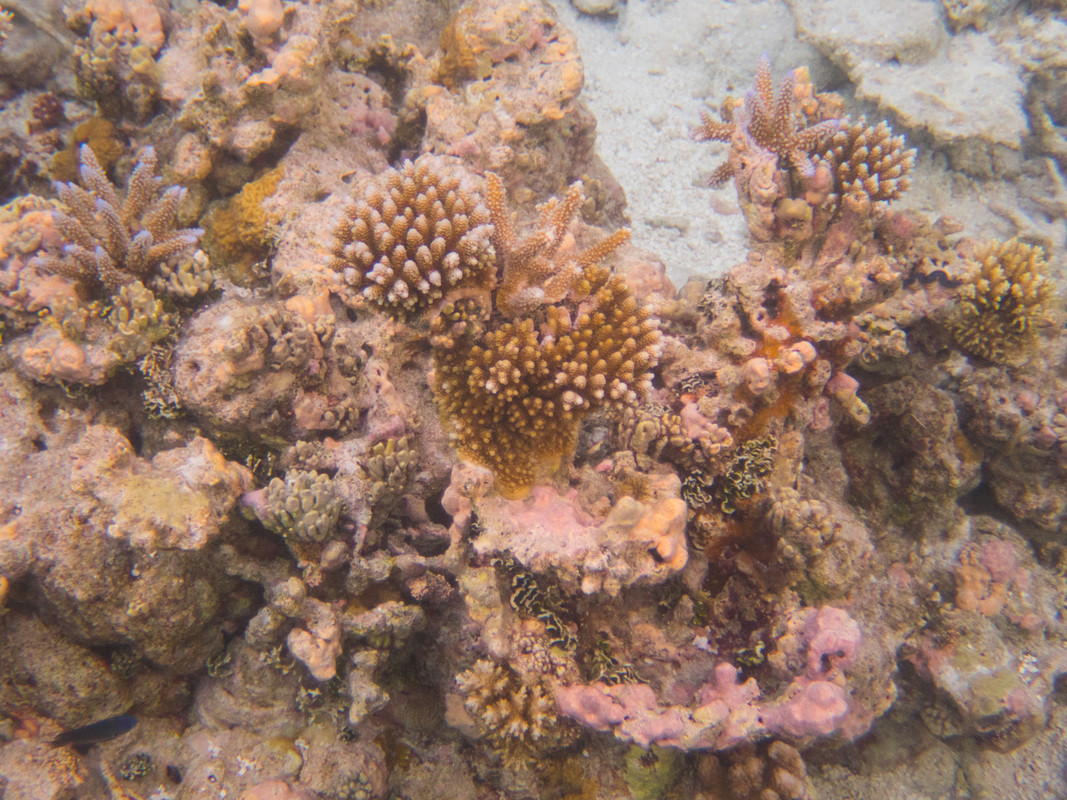 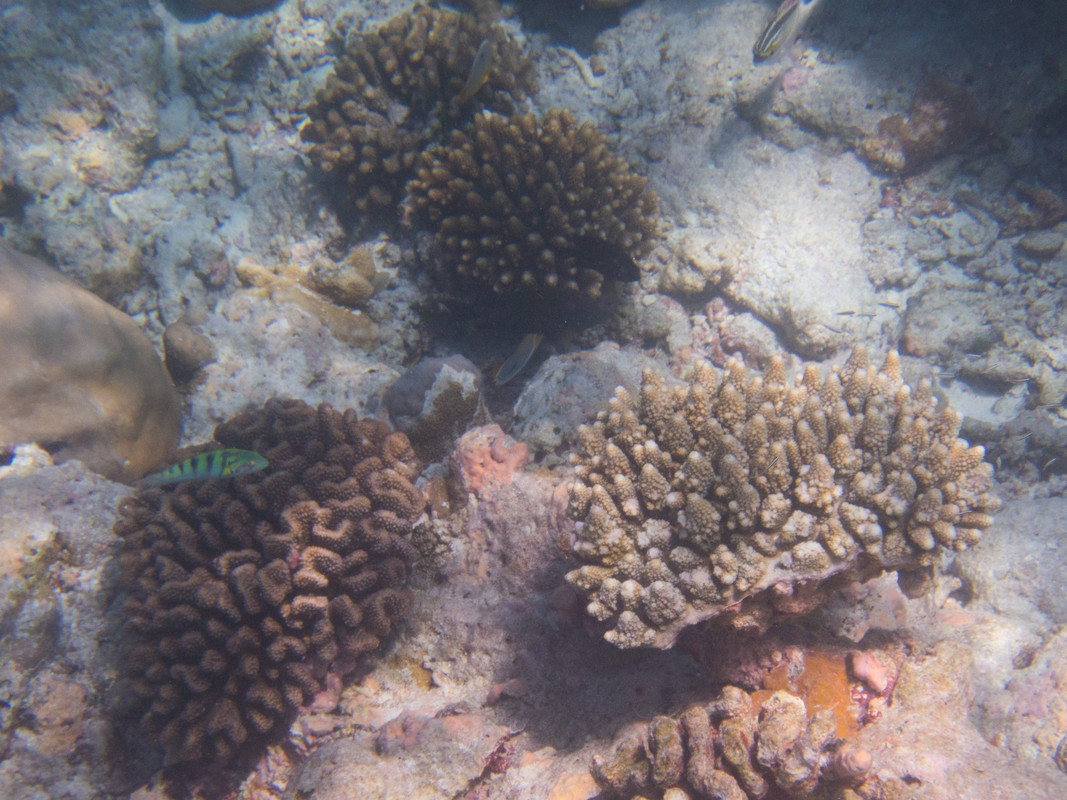 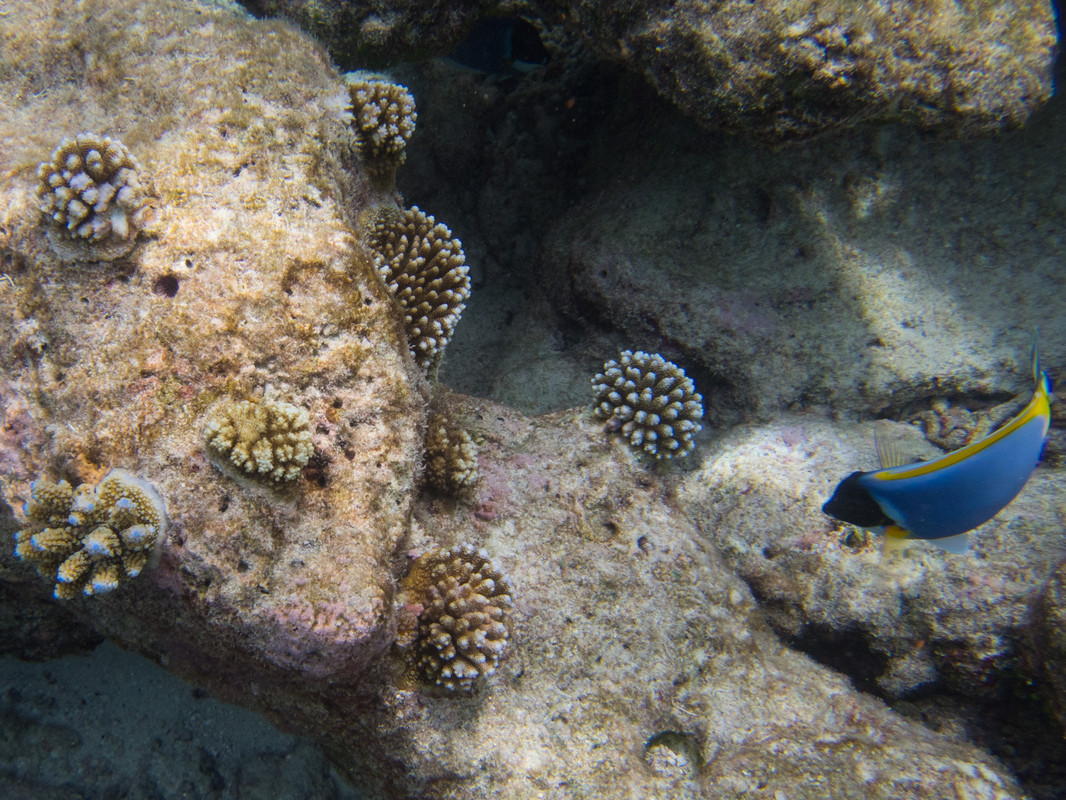 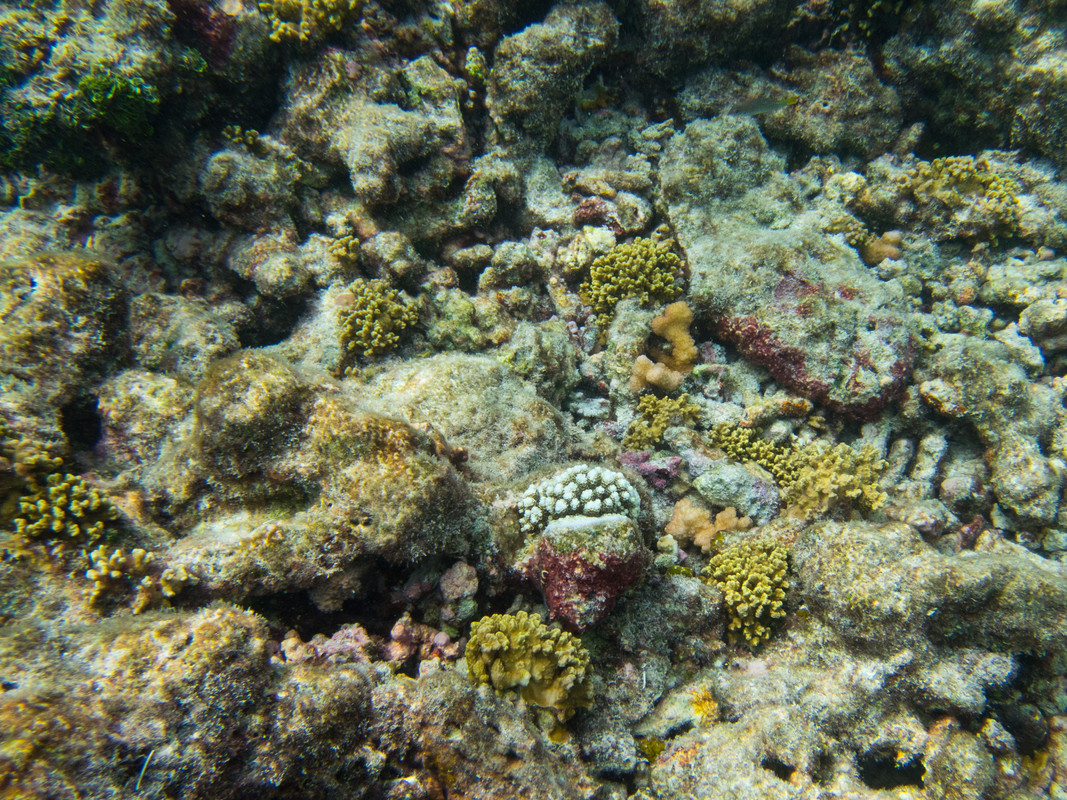 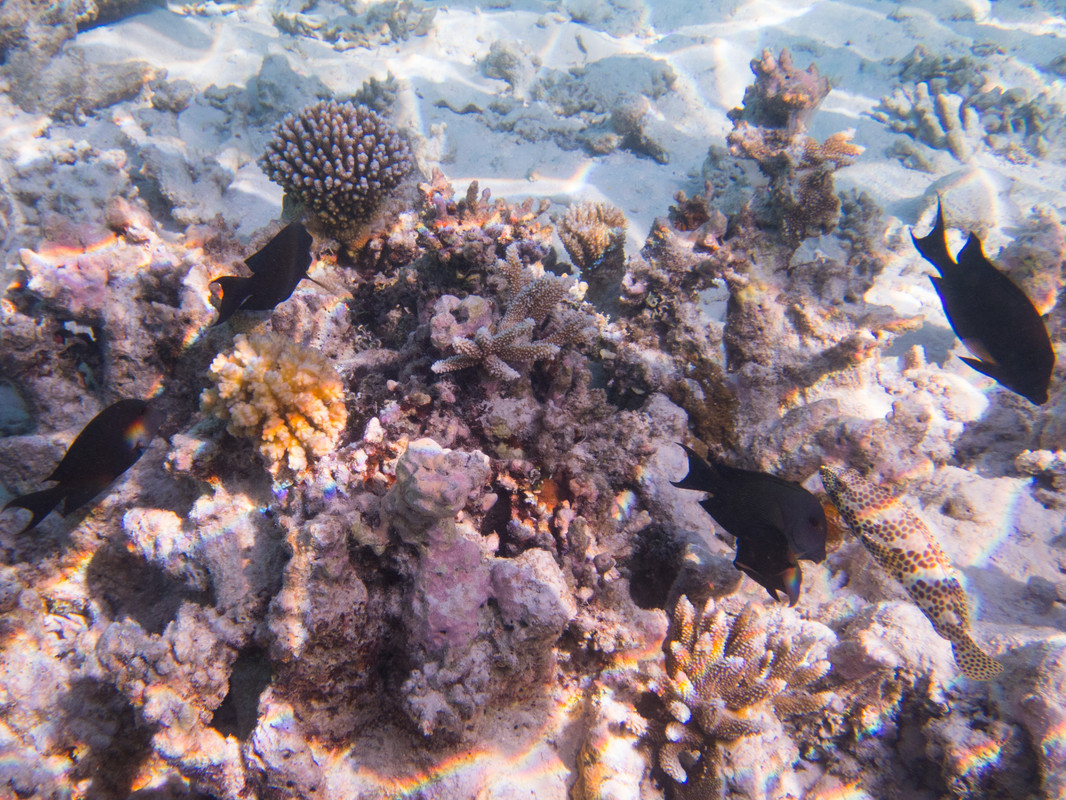 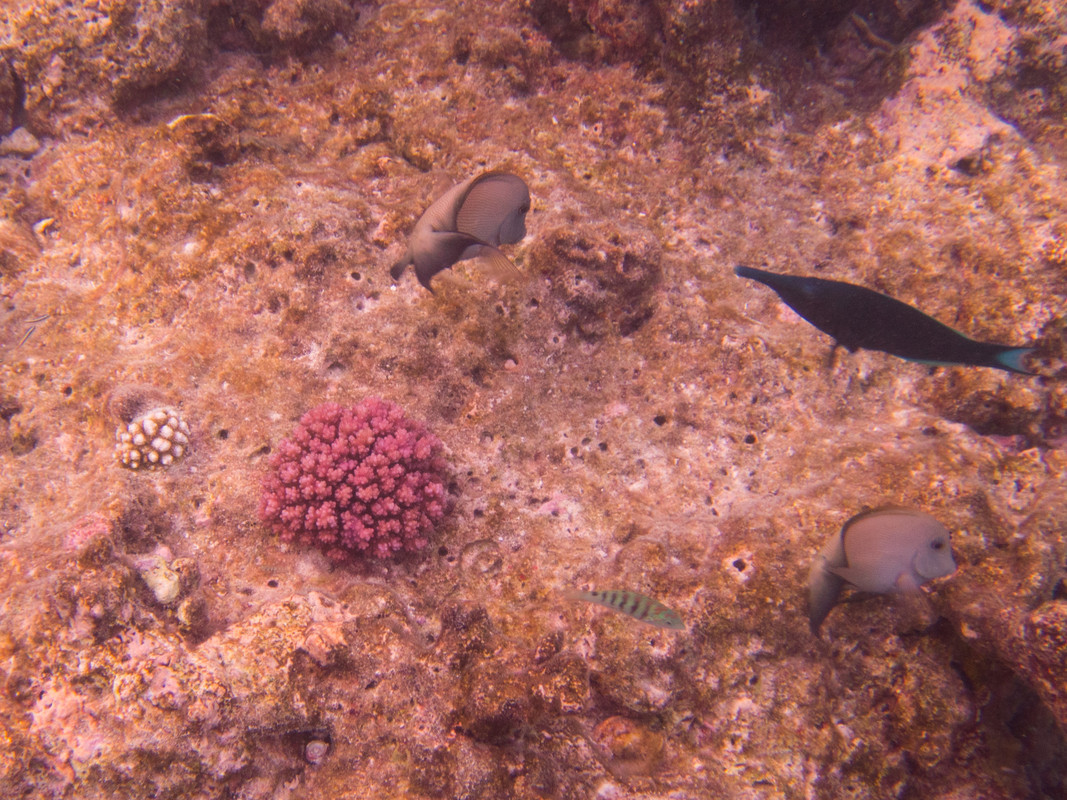 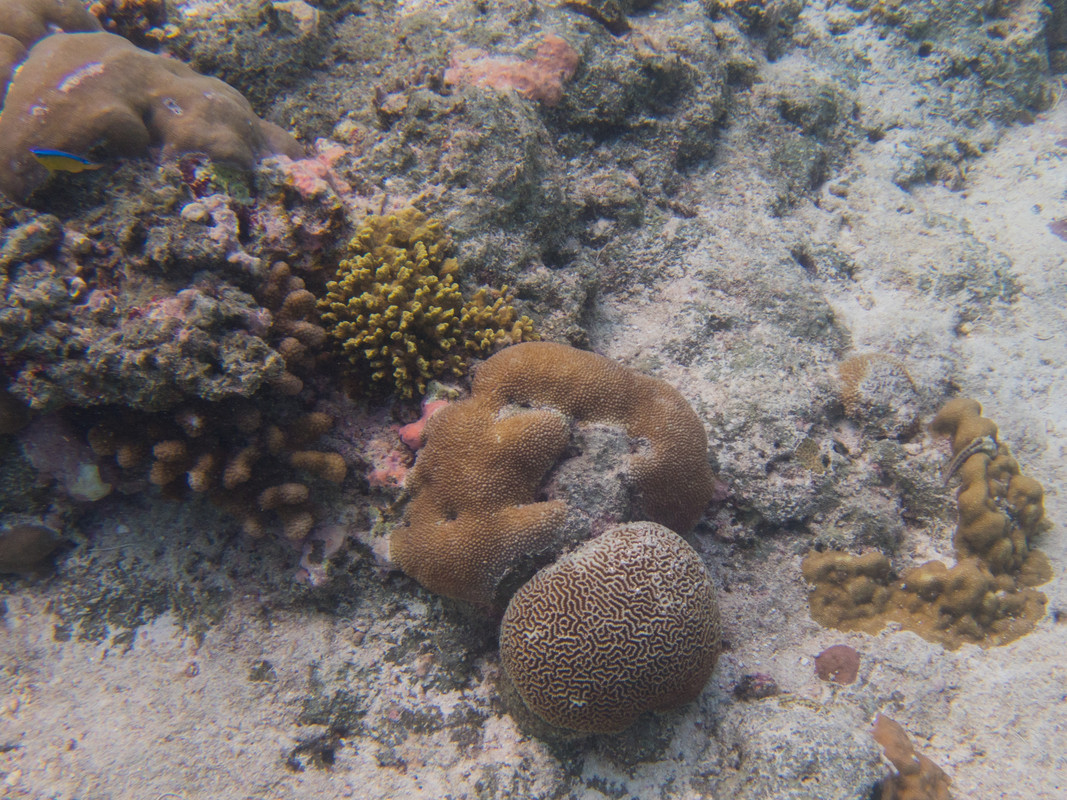 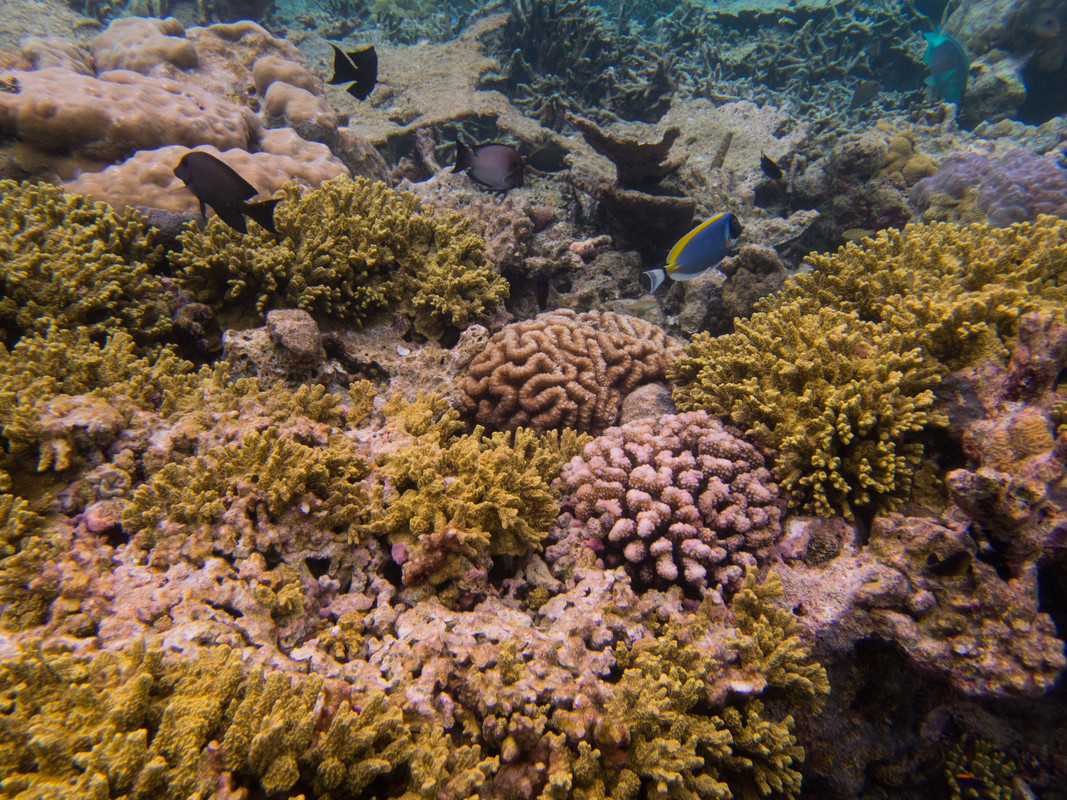 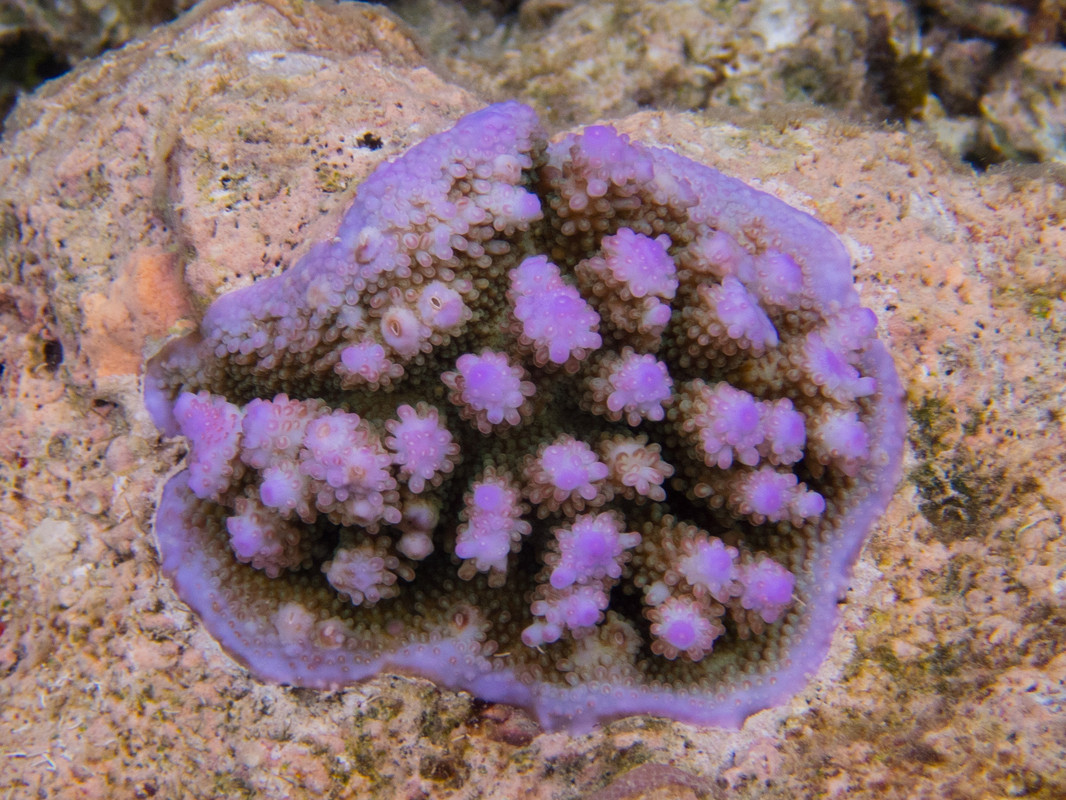 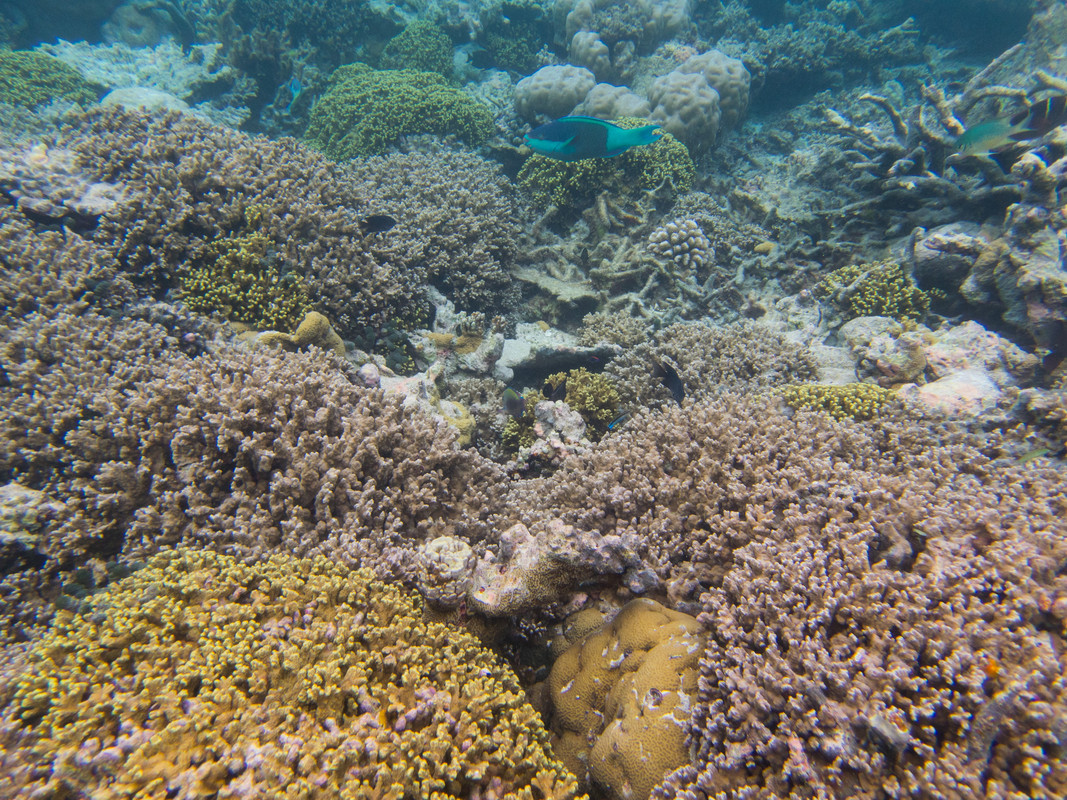 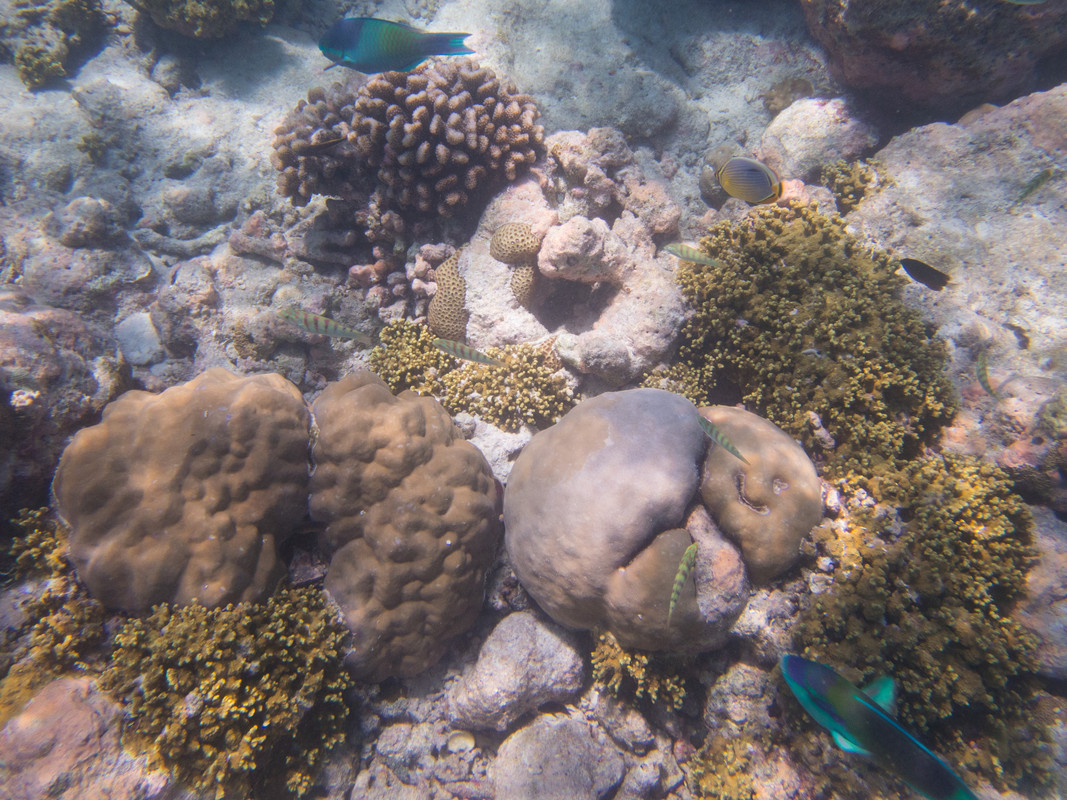 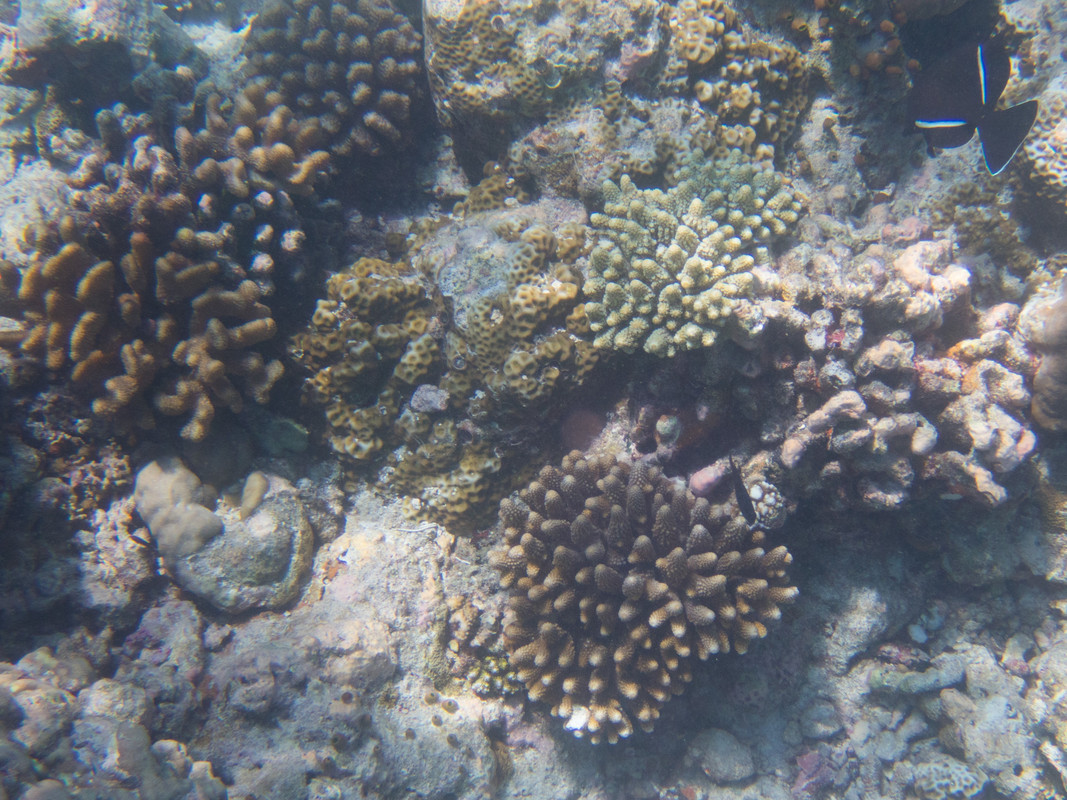 A common feature of many shallow Maldivian reefs is a large clump of coral inhabited by a shoal of small fish. These are very entertaining to watch, the fish swim around in the general area until startled, and then all dart back into the clump of coral.

I think these corals are all Pocillopora verrucosa, which is fairly easy to keep in a tank, and perhaps by starting with several similar frags attached to a lump of rock I could achieve a big clump eventually. Pocillopora verrucosa exists in various shades of cream/yellow/brown and pink/purple.

The most common fish species seen in these conditions are the humbug damsel (Dascyllus aruanus) and the blue-green chromis (Chromis viridis), both of which are commonly available in the trade and easy to keep, but in the confines of a tank it can be difficult to keep a shoal as they are quite aggressive to each other. I also saw a few corals with shoals of the chocolate-dip chromis (Chomis dimidiata) which is one of my favourites, but harder to get hold of in the trade (and I didn't get any decent photos). Another attractive option I saw is the cloudy damsel (Dascyllus carneus).

Other fish species can be seen in these photos, mentioned individually below:

Yellow coral with humbug damsels, including some very small ones: 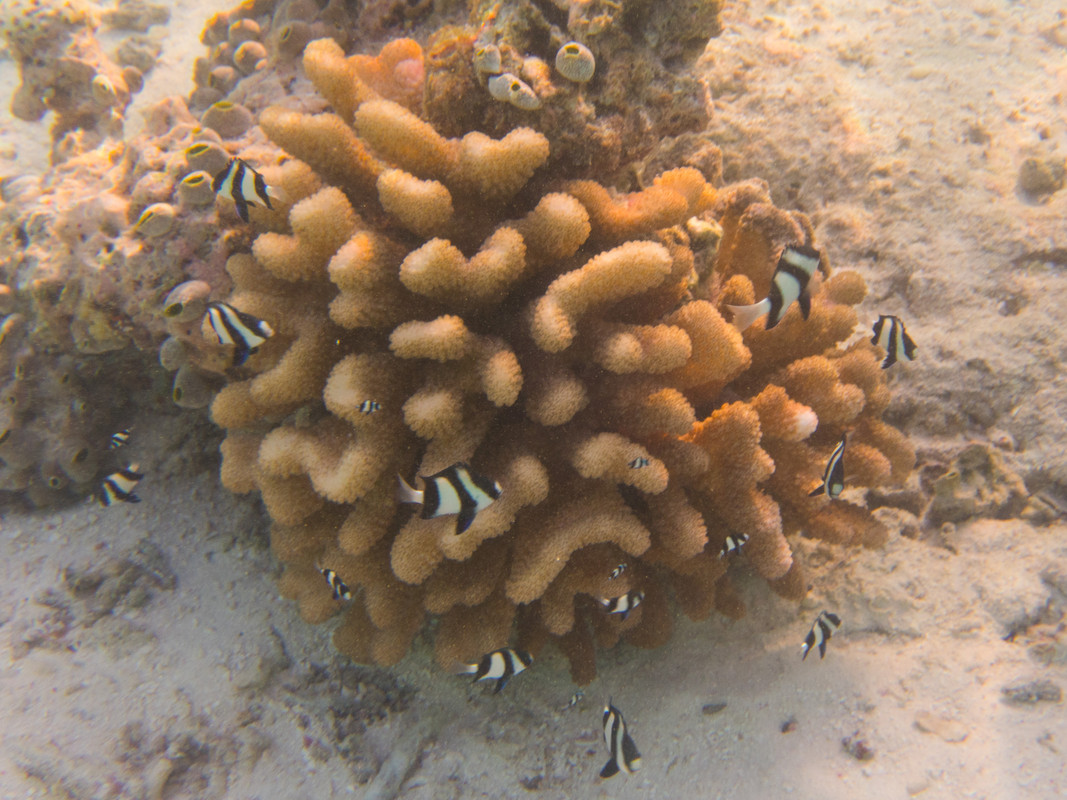 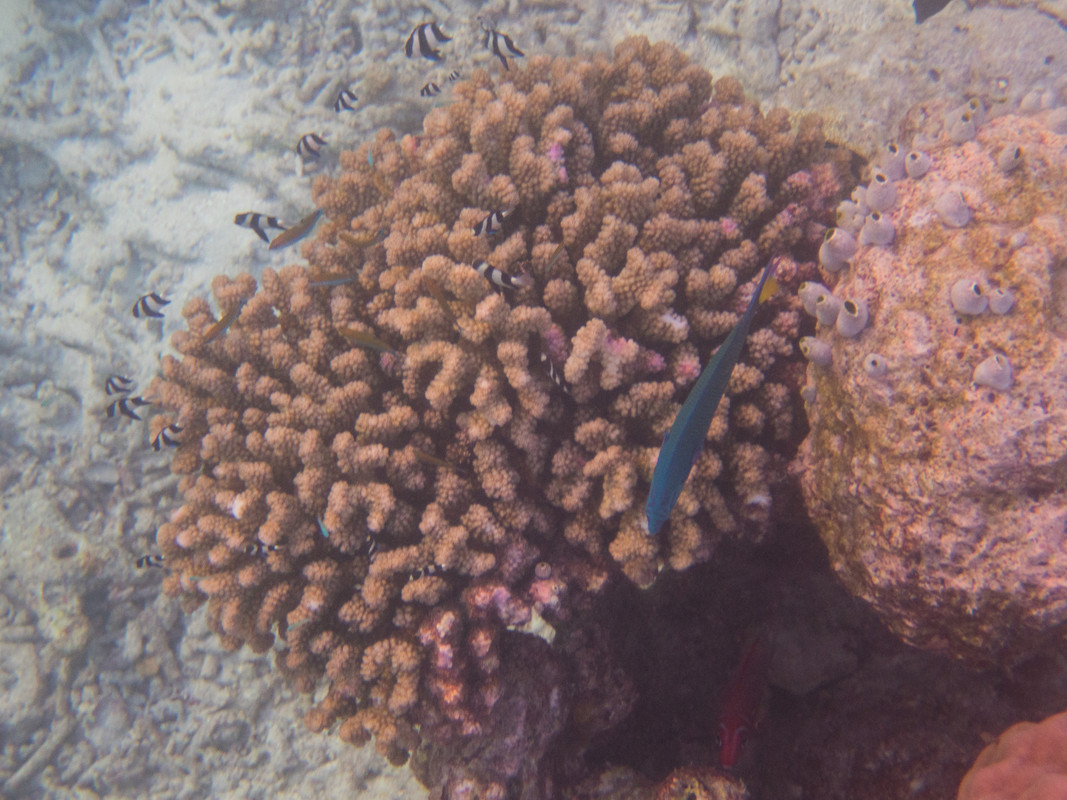 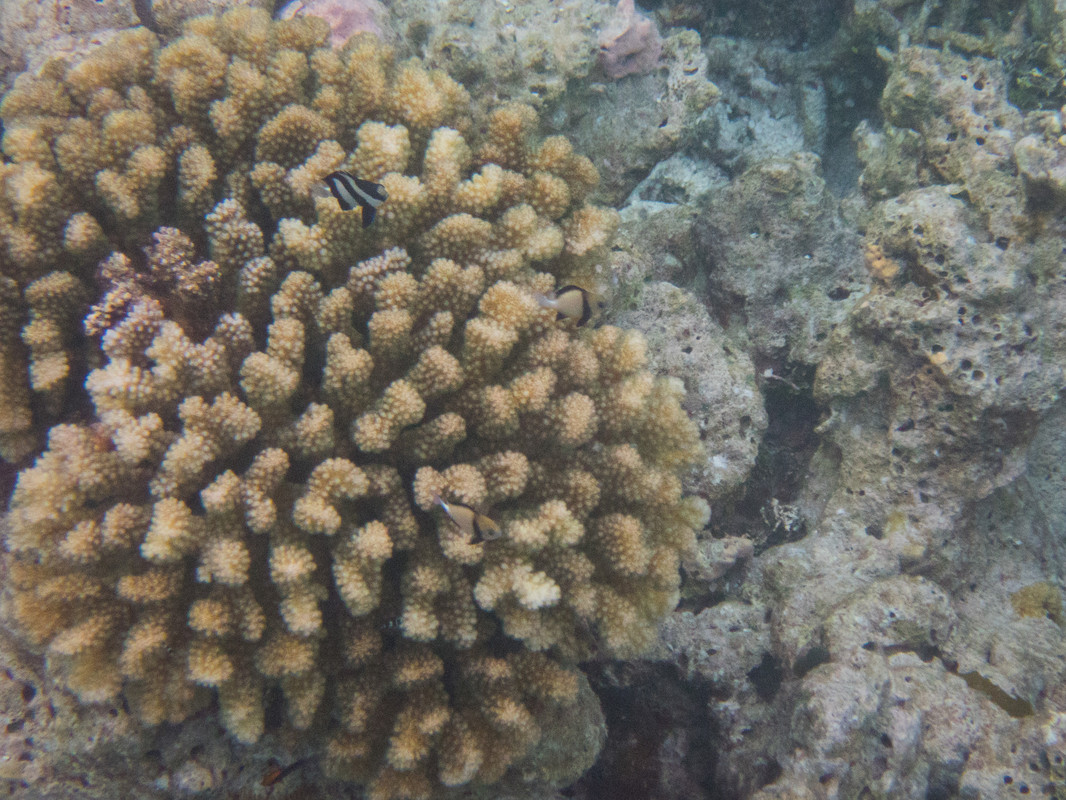 Pink coral, with a single blackside hawkfish (Paracirrhites forsteri). This would probably be too big and predatory for a reef tank. 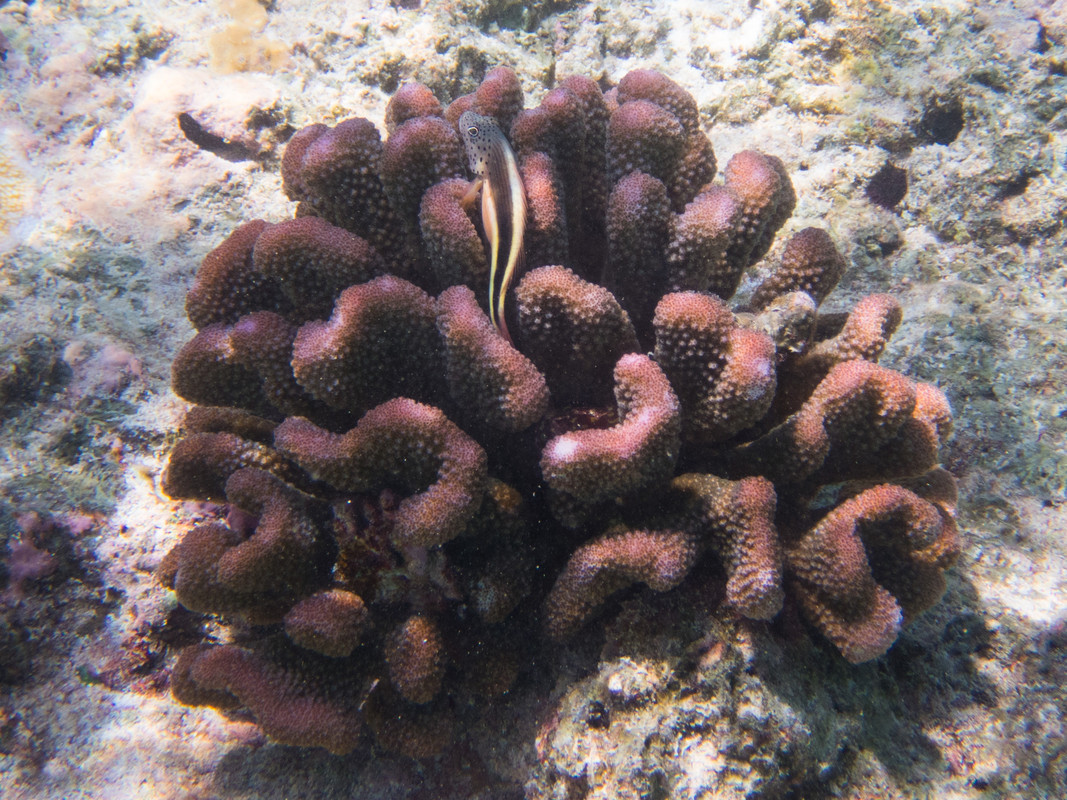 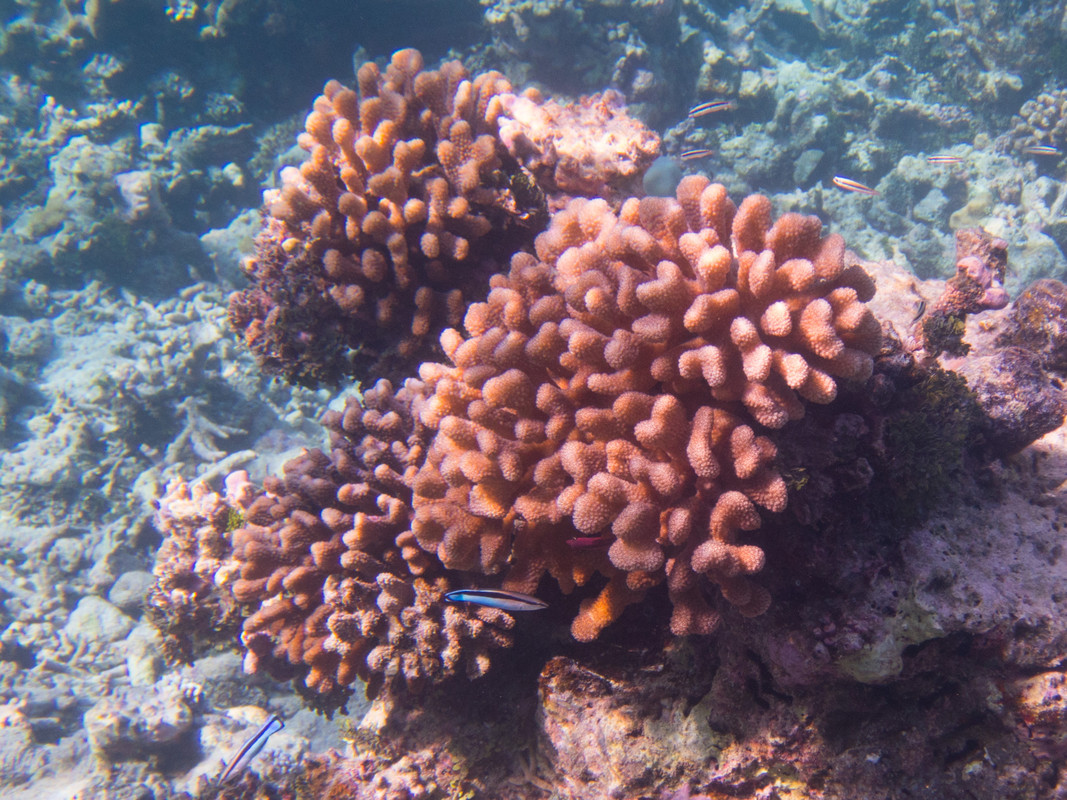 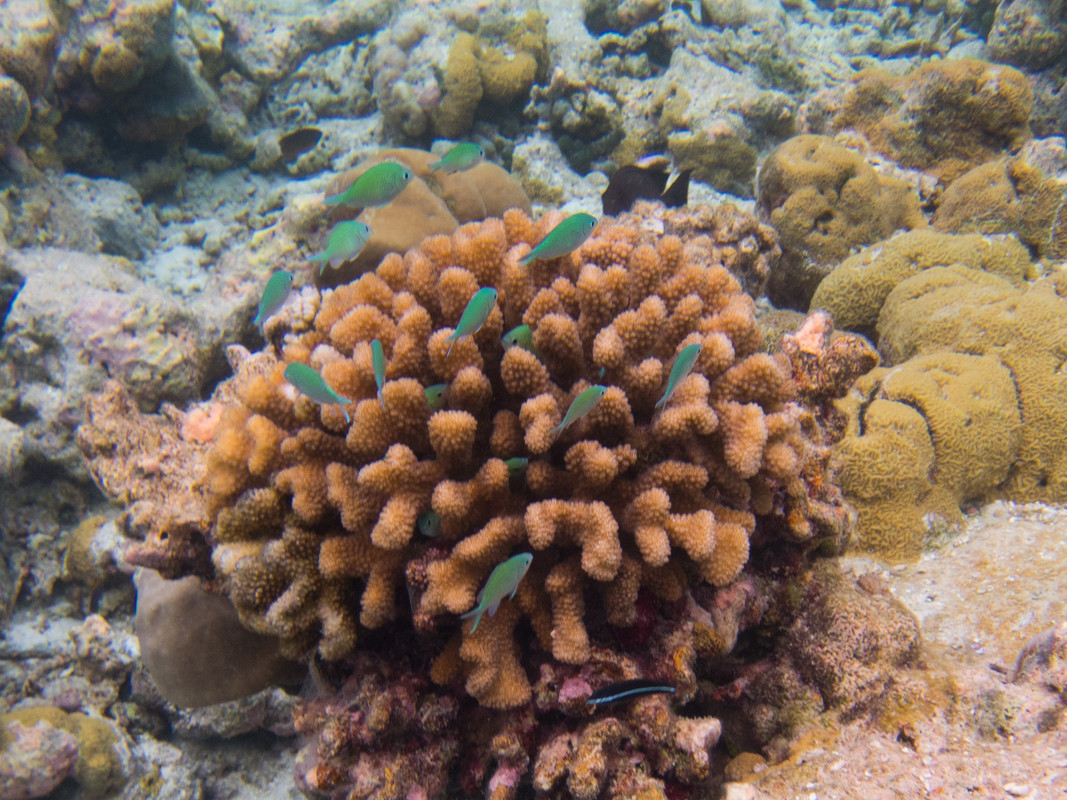 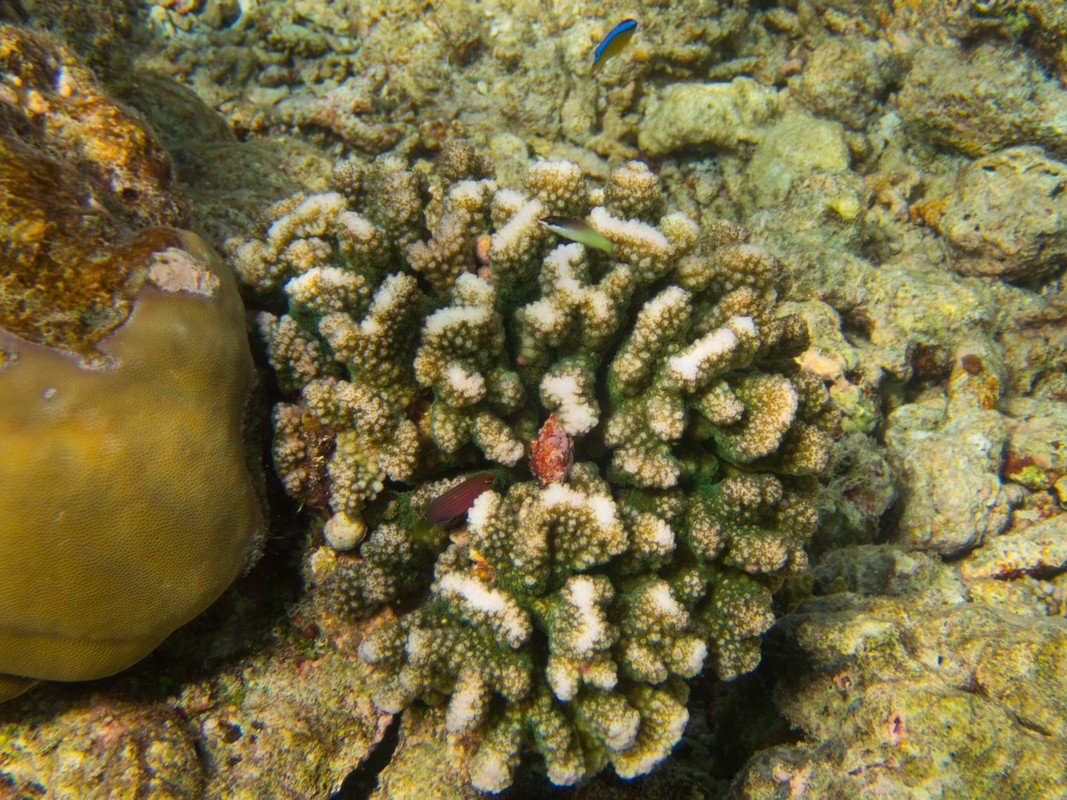 Yellow coral, closeup showing a hermit crab which are also commonly found among the branches: 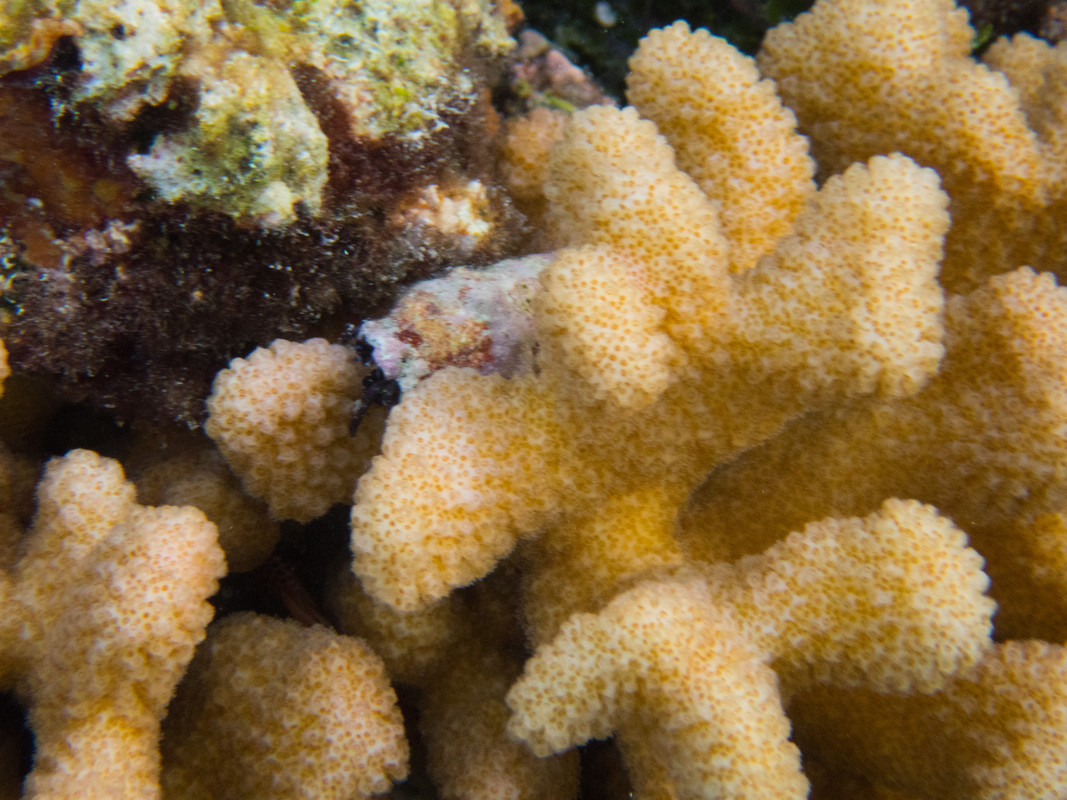 Brownish coral, with 2 sixstripe wrasse (Pseudocheilinus hexataenia), 2 surge damsel (Chrysiptera brownriggii) and a juvenile goldring bristletooth surgeonfish (Ctenochaetus truncatus: it is a tang, but not the common yellow tang, despite being the same colour!). The latter could be a possibility for the tank as it is a solitary tang rather than a wide-ranging shoaling species: 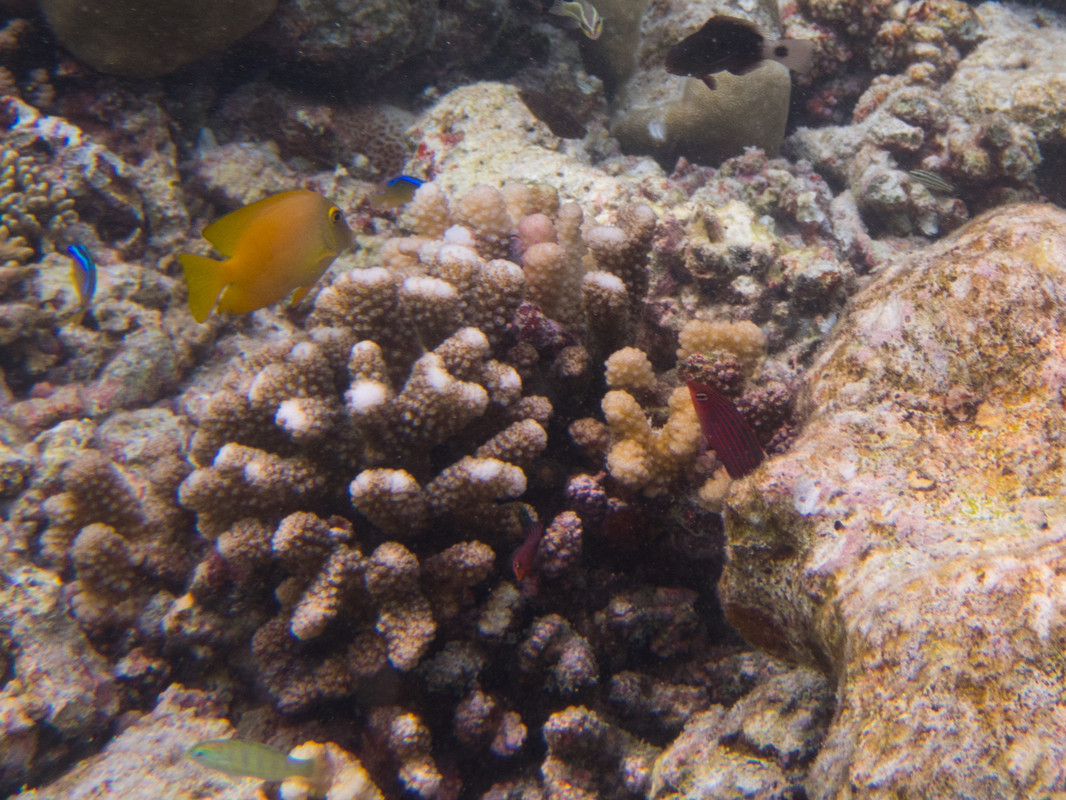 Brown coral with blue-green chromis and I think some juvenile lemon meringue wrasse (Halichoeres leucoxanthus), a group of something else in the background: 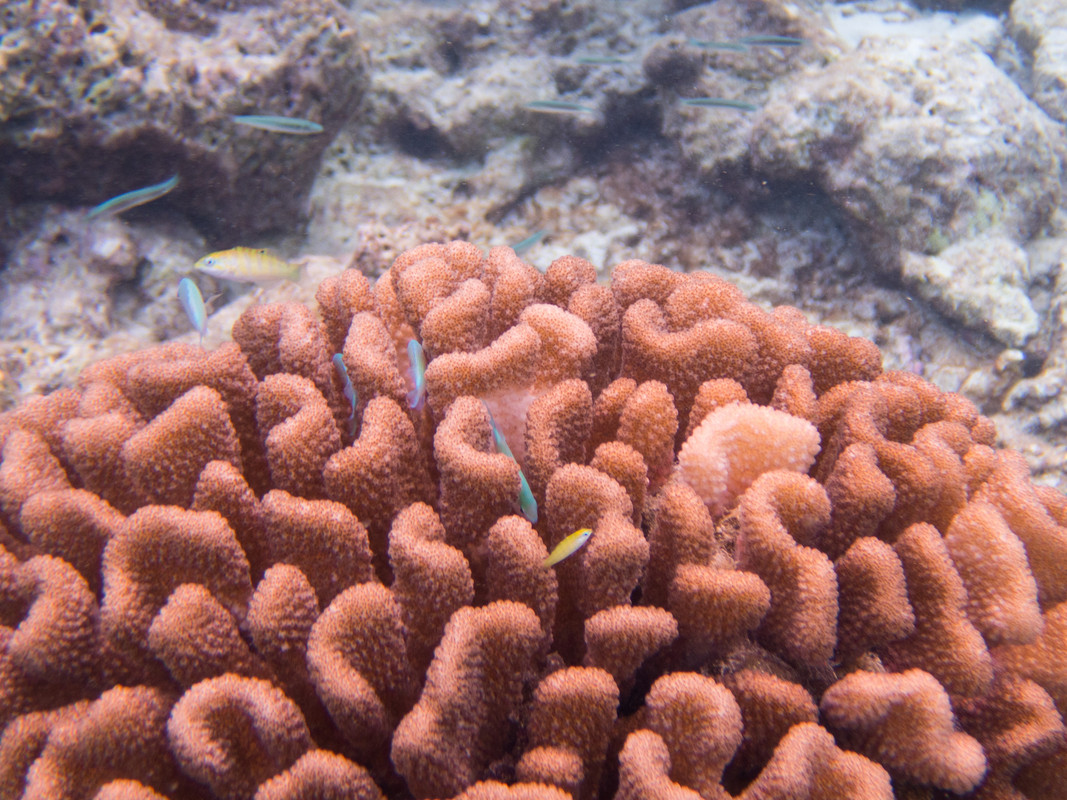 I think a clump of coral with a shoal of little fish would be a great cameo from the Maldivian reefs, if the fish don't kill each other. Any experiences of keeping groups of damsels/chromis?
Top
Post Reply
84 posts

Return to “The Marine Aquarium”