piker wrote: ↑
Sat Jan 04, 2020 17:44 pm
I've somehow missed this thread and enjoyed catching up.Great pictures from your holiday.
I never knew them tanks were made here in wigan,what's the finish like?Will be good watching this come together

Thanks! They're really top quality tanks, but not cheap! Still, I'm supporting a local business and I'm very pleased with the finish and the well thought-out design.
One of the main designers is one of the staff members at Burscough Aquatics and he basically designed the tank he wished he could buy, and then they built them! There's a range of 4 sizes I think; mine is the smallest but it suited the available space best.
Top

Any thoughts on what lighting you will go for yet?
Top

I’m not yet sure. Thinking of AI Hydra.
The main problem is that the quality light units are very small whereas I’d prefer a more distributed light to get into the corners. Of course I could buy more and spread them out but

I suppose to open up more coral choices lighting is something that cant be done cheap.
Top

That's very true. I intend this to be an SPS-dominated tank, and it's a 2-foot cube so I need good penetration of the light.
This is quite a useful website:
https://www.aquaillumination.com/lightsciences/par

The problem with these (in my mind) is that the two LED clusters are very close together, about 6" apart. So when considering a 2-foot cube tank, almost all the corals will receive bright light from just one direction, and the other side will be in shadow. That might not be ideal for growth, and there could also be a problem for viewing because if you put the light in the middle then the viewer sees the shadowed side of any foreground corals.

Ideally I'd like distributed lighting a bit like what Joe has done on his tank with four smaller units:
https://uploads.tapatalk-cdn.com/201910 ... 7fbc5e.jpg
However, the cost of four individual lights seems to be a lot more than a combined unit with similar output.

The AI single unit (Prime) looks a bit dim for my purposes, and still costs £200 each so a set of 4 would be £800.
The Radion single unit (XR15) is nice and bright, but at around £350 each it gets very expensive if I want 4 of them!
The AI Hydra 32 costs about the same as one XR15, and provides slightly more light with a better distribution.

So I think the Radions are pricing themselves out of the running.

Maxspect produce some lights including the 'Ethereal' (£450) and the the RSX100 (£400) which might be suitable and have slightly better spaced LED clusters. I need to look out some reviews of these.

One thing I haven't really considered yet is the control and progamming methods, and whether I need to buy additional hardware or software to control the lights.
Top

Do you not know of anyone who builds custom lights so you could spec it how you want it?
Top

No, are there such people? I imagine they would be even more expensive than a mass-produced one.
Top

I have completed the scape for the tank today. I used some perspex rods as 'legs' to support the higher rocks in the boulder, to prevent an avalanche. Some groups of rocks are stuck together with milliput to improve the structural support. However, it is still possible to take the boulder apart.
This weekend I have also commissioned the auto top up unit, which seems to work very nicely. I chose a Tunze nano osmolator.
I also have a huge bucket of reefflowers sand ready to go into the tank.

Currently I am mixing up a batch of saltwater in my mixing drum. It's going to take 3 batches to fill the tank entirely so I'll do that over the next few days. Then I can finally complete the pump circuit to connect the sump (which has been running for a month) to the display tank.
Top

This photo shows the perspex rods supporting the higher rocks: 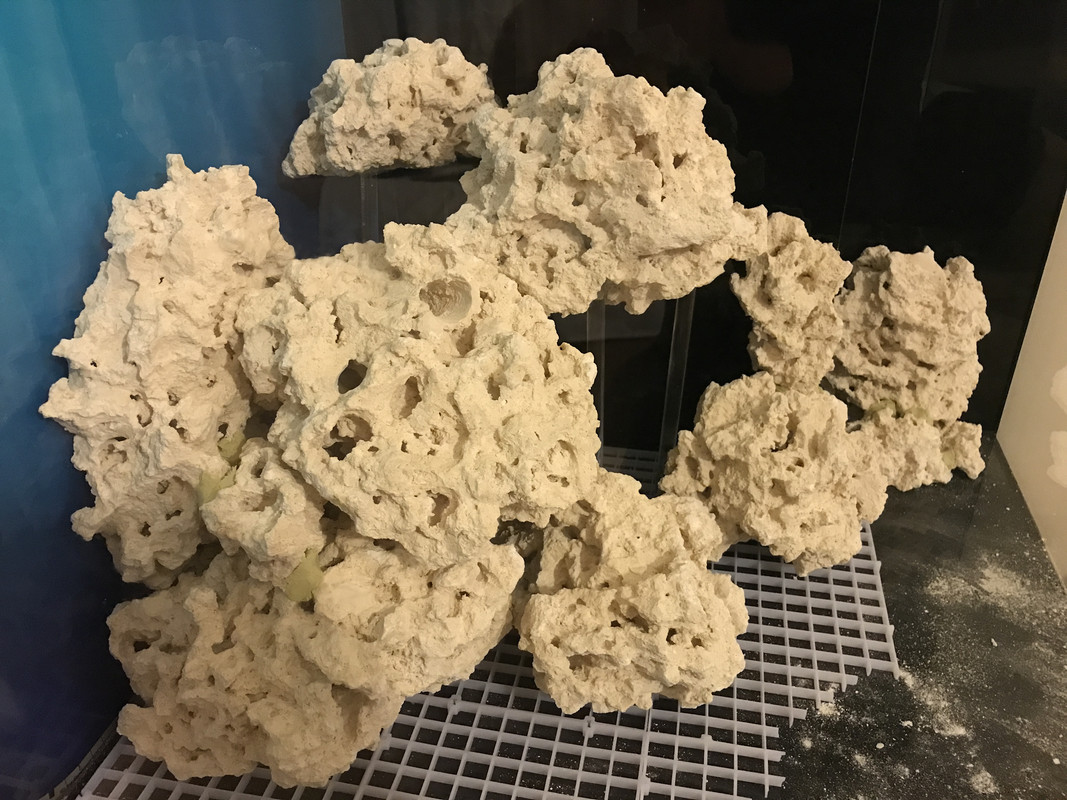 More rocks have since been added to fill the gaps and complete the scape.
Top

I'd go hybrid all the way with lighting.
Top
Post Reply
84 posts

Return to “The Marine Aquarium”