A place to keep us informed of the goings on in your tanks. - Tank Logs
Post Reply
138 posts

Stephen's 550L tank log (summary & continuation from original tank log)
Stephen's 550L tank log
This is my tank log of my 6 foot 550L aquarium dating back to Sunday 4th September 2016 to present day.
It is quite long so give yourself at least 10 minutes to read it all.
This tank log details the setting up, the mistakes, mishaps, frustrations, disasters and changes to the layout and changes to the stocking.

About myself & my history
I was born & live in Hereford, Herefordshire in 1959.
I went to an excellent Grammar school (1970-1975)
I was employed as an area sales manager for many years with different national companies.
In 1998 I was diagnosed with a spinal condition (narrowing of spinal canal and degeneration of spine) which ended my working career.
I struggle to walk, struggle to lift and other things and I am in pain daily, some days are worse than others.
I can not sit for too long (this post will likely take me well over an hour), I can not stand still for too long; I have to stand and move after sitting for a short while, I also have to sit if standing or walking for a while. I can not get out of a bath without assistance and with assistance it is still difficult, thank goodness for showers.
I am married to Gillian (Gill), we only got married on 1st March 2017 after a long (over 14 years) engagement.
She often tells me off for doing things that cause me additional pain or that I will pay the price for afterwards but I always say "no pain, no gain". I won't allow my disability to control my life although I do know my limitations but to achieve anything I do push those limitations.

Tropical fish
I only started keeping tropical fish back in July 2013. My first tropical fish tank was a Fluval Roma 240.
As with all my interests and hobbies I spend a lot of time reading and researching. I have probably spent over 10,000 hours reading and researching about tropical fish.
I have a “go to” datasheet which list over 1,700 fish species with information about pH, water hardness, water temperature, size etc.. I also have my “master” datasheet which lists over 17,000 fish species.
I have also datasheets of fish species found in countries (especially south American countries). I have also broken those datasheets down to create new datasheets of fish species found in certain rivers within the countries.

My fish keeping history
I bought my first fish tank around 1990/91, it was a coldwater tank with a few fancy goldfish type species (shubunkin etc..)
My first tropical tank, a Fluval Roma 240 was only purchased in July 2013.
My second tropical tank, a smaller 125L was purchased in October 2014.
Both tanks took up 6'6" of floor/wall space with a total volume of about 365L, so I said to myself that it would be good to combine both tanks and to have a single tank which takes up the same space but a little deeper. So in November 2015 I started planning (on paper) an upgrade; a single tank which could of been 5, 6, 7 or even 8 foot (at a push).
Eventually after several months of consideration I settled on a 6 foot (550L) tank. The hardest bit was to persuade the OH, she eventually came round to my idea and soon became as excited as I was, well almost.
6 foot (550L) - Rio Negro themed
9 x sub-adult Biotodoma Cupido, 49 x Hemigrammus bleheri, 40 x Paracheirodon axelrodi, 14 x Corydoras duplicareus, 8 x Corydoras burgessi, 2 x Hypancistrus inspector L102 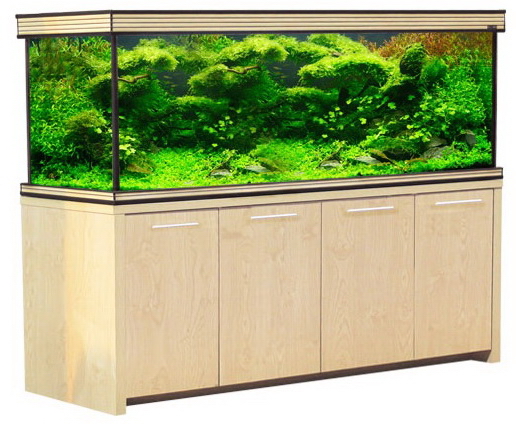 Well that's the plan, sounds easy until you add the fact that I have a spinal disability and in constant pain, any lifting is difficult & painful, as is walking and other activities.
As the saying goes, "no pain, no gain".

The first part is clearing out the old tanks and making room for the new one.
Everything was at hand ready and hopefully fish will be in their new home within 24/36 hours.
All done before Monday morning on 12/09/2016, off to Cornwall for a short break.

March 2017
Got married to Gill, we had been engaged for over 14 years.

We had a disaster in September 2017 (just one year after starting the Rio Mamoré theme) when all the Cupid cichlids were found dead.
This was so upsetting that we decided to change themes as opposed to replacing the dead fish

October 2017
Rio Meta in Columbia.
One of the fish species in this new theme was Aequidens metae which predated on all the Rummy-nose tetra. The theme only lasted a month.

December 2017
My best friend of over 50 years passed away on 24th November 2017.
I had a mini stroke (aka TIA which is an abbreviation for ‘transient ischaemic attack’.) in December.
All tests and scans were good.

April 2018
Rio Negro in Brazil
I had another predatory fish (Crenicichla regani) which predated on all the Cardinal tetra and all the Rummy-nose tetra. I’m not completely happy with this theme.
I’m still trying to get my mojo back but struggling.

July 2021
Had a bit of Neon tetra disease (NTD), plecos are too messy as they are wood-eating plecos (too much hard work cleaning).
The Gold laser cory are lovely but I just don’t see them until feeding time.
Rio Nanay in Peru (as in the 3 themes listed above)
Keeping the Cupid cichlids (Biotodoma Cupido) but new Tetra and new Corydoras.
Wed 7th July, 2021
Just arrived home after a trip to MA at Swindon.
I came home with 15x Corydoras agassizii which are a very good size, maybe 2 inches. The females do grow to around 2.8 inches.
I also came home with 50x Ember tetra. 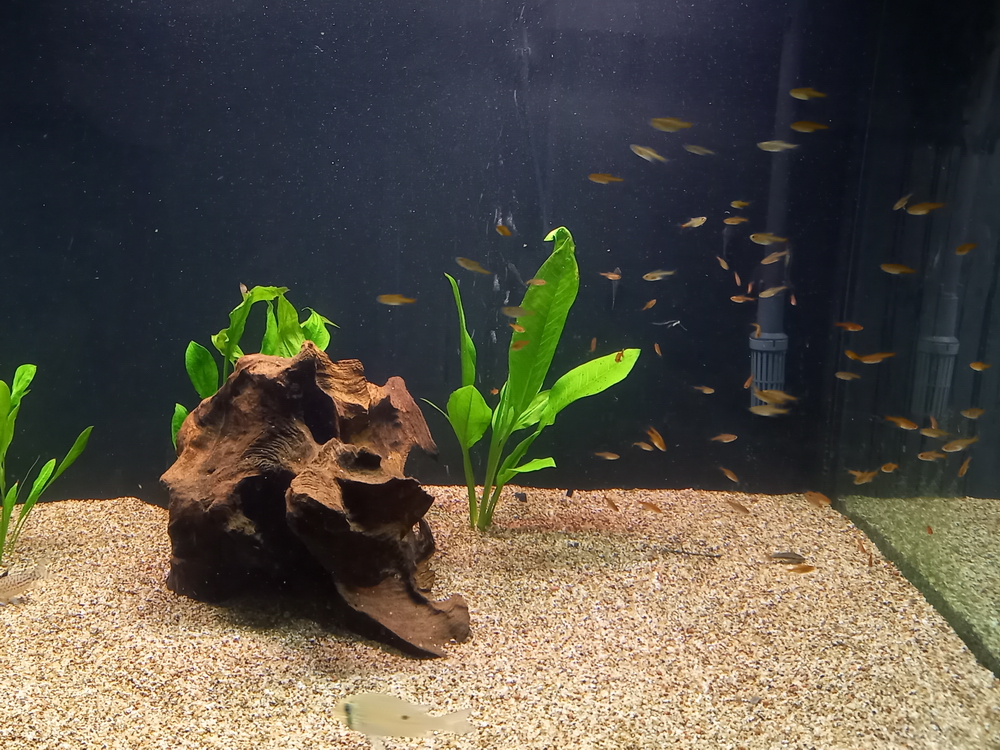 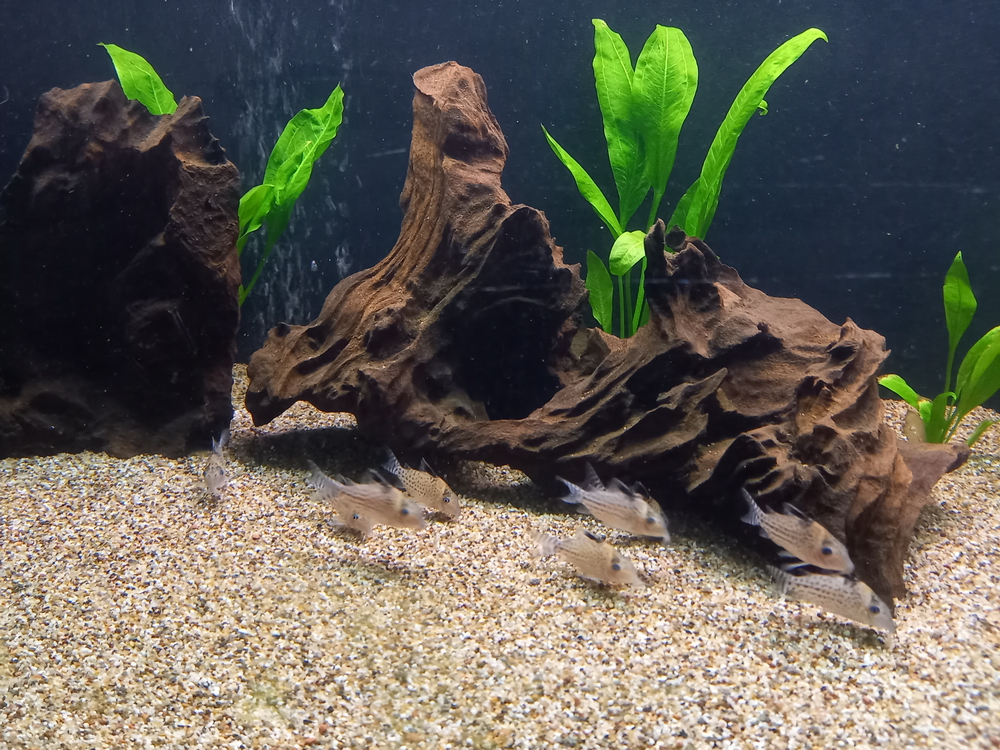 A full aquarium pic (not finished yet but give's an idea), I have some bogwood to add and the plants need to establish.

Hello Stephen, I love your diligence in researching and keeping the various species geographically precise.
I tend to stick to South American fish myself but I'm not quite as strict on their location, as long as they come from somewhere in the Amazon

How are you finding the Cupid Cichlids? They could hold some potential for me in my quest to find compatible species.
I'm guessing they're not too big or aggressive as you have them in with Embers.
Top

SomersetMatt wrote: ↑Fri Jul 09, 2021 11:30 am Hello Stephen, I love your diligence in researching and keeping the various species geographically precise.
I tend to stick to South American fish myself but I'm not quite as strict on their location, as long as they come from somewhere in the Amazon

How are you finding the Cupid Cichlids? They could hold some potential for me in my quest to find compatible species.
I'm guessing they're not too big or aggressive as you have them in with Embers.

I've kept Cupid cichlids for several years. They will grow to a little over 4 inches when fully grown.
They are not aggressive towards corydoras or tetra, but will bicker amongst themselves when setting up territories or pairing up.
I have 9 x juvenile Cupids and when they pair up then I will reduce the numbers. I have an agreement with the LFS who supplied them that they'll take the non-paired back.
I have two pre-prepared potential spawning sites ready for when they do pair up.
One site is at the far left, back corner and the other is on the far right, back corner.
I have buried a large flat stone in each corner, the cichlids will clean the spawning site before laying eggs, but that is quite a long way off, maybe another year or so.
I have purposely kept the potential spawning site clear of plants (this time) so that I can observe any spawning activity in the future.
I may add some shorter mid-ground plants just to camouflage the potential spawning area in the near future.

This 550L aquarium is looking quite bare at present but it's only been days since I totally re-vamped it earlier this week.
The plants need to establish, grow and fill out. I also want to add another corydoras species and maybe another tetra species, although I may increase the Ember tetra numbers.
6 foot (550L) - Rio Negro themed
9 x sub-adult Biotodoma Cupido, 49 x Hemigrammus bleheri, 40 x Paracheirodon axelrodi, 14 x Corydoras duplicareus, 8 x Corydoras burgessi, 2 x Hypancistrus inspector L102

Back to Basics
Back 2 Basics
Fr499y’s shrimp tank

Before you get anymore, can you get your current Embers to sit still, I'm still trying to count them.

WARNING - DO NOT BREED, FEED OR PET THE PUDDLE!

Martinspuddle wrote: ↑Fri Jul 09, 2021 16:42 pm Before you get anymore, can you get your current Embers to sit still, I'm still trying to count them.

Martin; a photograph is still, a camera freezes the action

To be honest I think there are more than 50, I'll have a re-count.
(one minute later)
Having just taken 2 photos and counting them (viewed in Ms paint and crossed off), I have counted ...... 72

I'll do it again to confirm.
(a few minute later)
This time I count 76

There is definitely more than 50, so I'll settle at 70.
I may do the same exercise tomorrow but with a faster shutter speed.

Thanks for bringing this to my attention.
I don't care what the others say about you, you're not a fool.

I need another species of Corydoras, here are my choices.
(click image to enlarge) 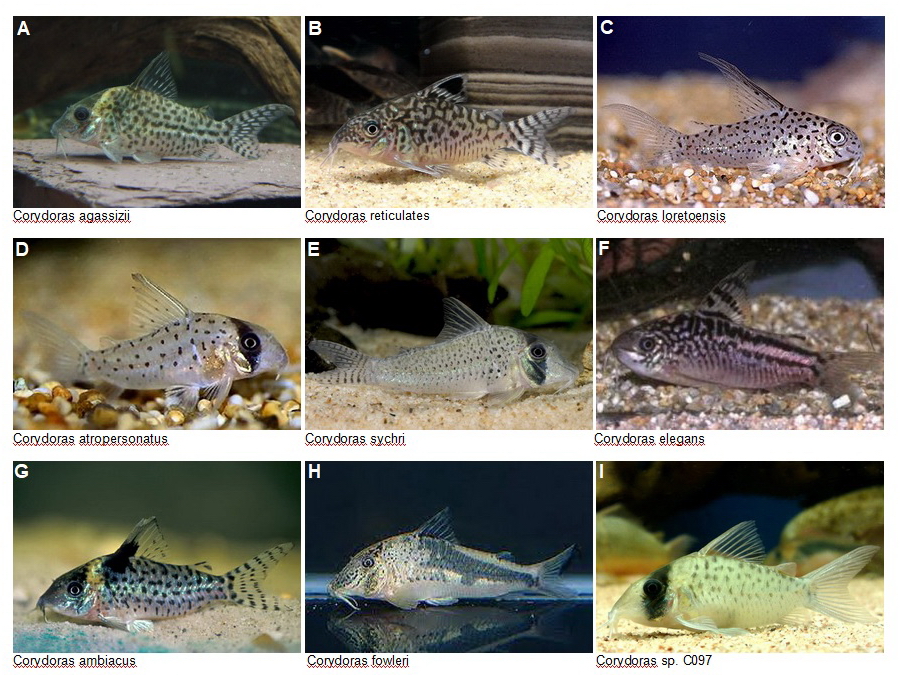