A place to keep us informed of the goings on in your tanks. - Tank Logs
Post Reply
36 posts 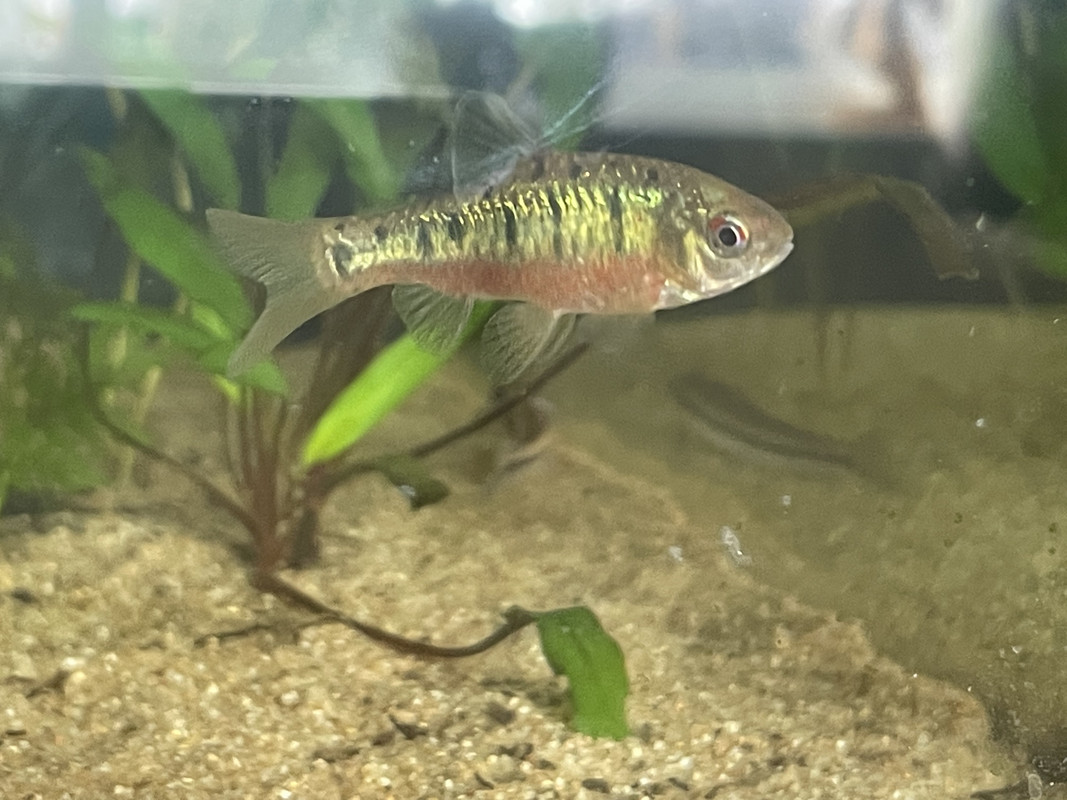 Snyders Barb (Puntius snyderi) I've only seen for sale once in Aylesford Aquatics in Kent many years ago. A beautiful Barb much the wild form of the Golden Barb (Barbodes semifasciolatus) which you almost never see on sale.

Golden Barb (Barbodes semifasciolatus)
WARNING - DO NOT BREED, FEED OR PET THE PUDDLE!

@black ghost @plankton and anyone else that might know
Big disaster in this tank feeling despondent at the moment, there has been no issues with fish in this tank except with the tiger barbs, some small albino's TBs along with some Danio the first fish in here, about 6-8wks ago, they were small have never grown or thrived have been loosing them slowly for no apparent reason, on water change day (Sat) decided to catch the remainder to treat with wormer separately although I had already done this in QT this was fairly easy as they were quite weak and I lost 3 just in this process,
The next morning one of my Mascara barbs was dead, this was surprising it seemed ok the day before, several others were breathing heavy, did another 80% water change despite it testing ok then was away for a night
when I got back it was awful most of the Mascara barbs had died, all the other fish were clearly sick showing fungus or bleeding on the fins or in the case of the danio swimming very fast like they were irritated, started treatment with Myxazin which has done something as the erratic swimming has stopped none have got better but I don't think they have got worse so far I have lost all the mascara barbs all 3 loaches and several of the other barbs look very bad, this happened in no more then 48hrs,
what could have caused this? The tiger barbs were clearly weak and never put on any weight but have never showed any fungus or other symptom like this and have been in the tank at least 6 possibly 8 weeks
Have been doing some reading, low flow is mentioned a lot, this is a possible cause as the flow from the Eheim pro4 is not great, but the tank is only half stocked and as a temporary measure I supplemented it with 2x internal filters and a circulation pump which I admit I was only turning on for an hour in the evening - I now have it on full time - I have ordered a Fluval FX6 which should solve any issues with flow, could this sort of dramatic loss be caused by something like low flow?
Here is a pic of one of the barbs on this one the fungus looks to be over the eye most just have it on the fins but 2 of them look to have it all down one side, I plan to start Protozin after the current treatment finishes, I am very upset not sure how this could have been prevented, what did I miss, surely it's a disease not 'just' fungus any idea's? 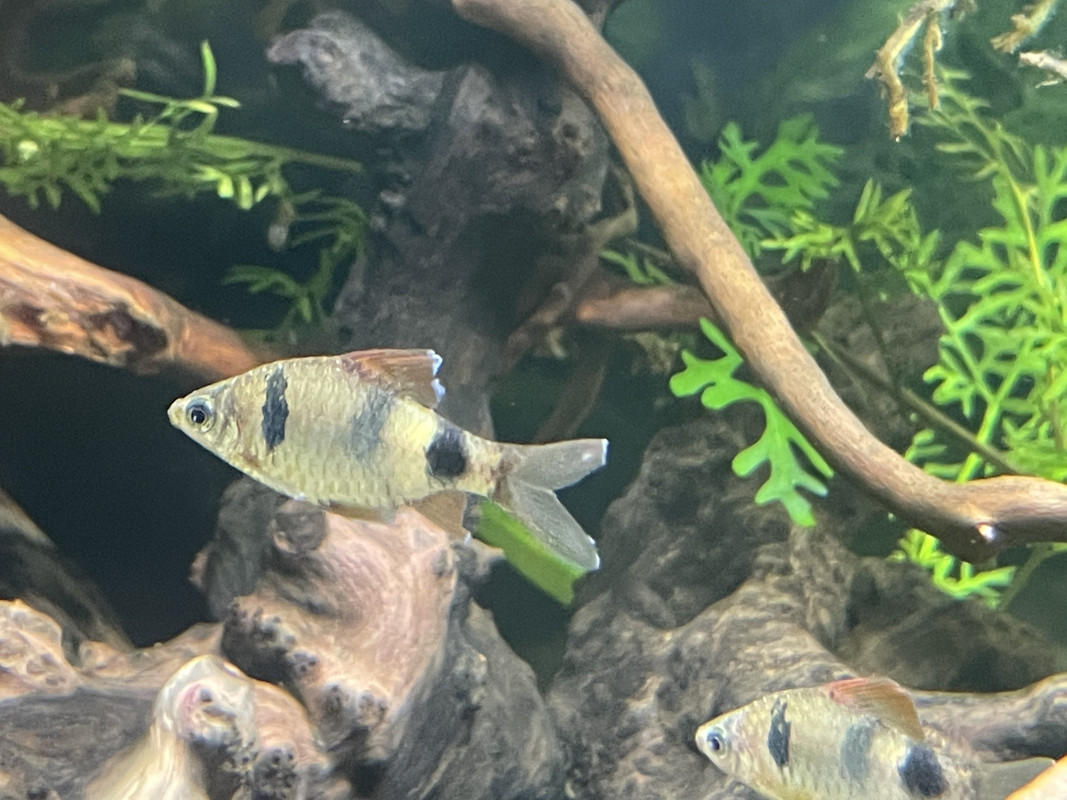 Cycle crash? Have you checked the pro4 is not bunged up?
Top

yes water tests have come back perfect the whole time just done another one again it's fine, the filter is running as well as it ever does, it's not just fungus some are showing bleeding at the base of the fins

Strikes me to be an underlying bacterial issue. You say it's 480 litres, what the actual turn over per hour?

Some Barb species have a lower tolerance for nitrates above 10 ppm in aquarium water or as @black ghost has pointed out this morning, have you tested your water supply?

Reason I asked about your water turn over In Mascara Barb (Dawkinsia assimilis) case, these are found in strong flowing streams there may not be enough dissolved oxygen with in the water column causing stress.
Last edited by Martinspuddle on Wed Aug 03, 2022 7:29 am, edited 2 times in total.
WARNING - DO NOT BREED, FEED OR PET THE PUDDLE!

Tiger Barbs can be very weak, especially the colour varieties.

Only one cause for me. Bad tapwater. Too much of a coincidence to not be the cause. It happens, and it can wipe a tank out.

I would not change any more water for a while (your guess as good as mine), use PolyFilter (or Carbon, PolyFilter is better), and treat for bacterial. If they’re poisoned they’re likely to get any latent disease that’s there, and bacteria are always there.
If it is a bad batch of tapwater you might not see much improvement in the fish.
I don't keep fish, I keep water. Water keeps fish.
Top

I agree, it sounds like the tapwater - ring the supplier and find out if something different is happening with the supply, or there's any works on the supply.
Ordinarily I would suggest you'd forgotten the conditioner, but with the supplies being changed all over because of the weather, who knows whether the supply is regular or changed unless you test every week.....?
Top

Ok thanks this makes sense I suppose, although all tanks got changed on the same day with the same water and same bottle of Prime, I will open a new bottle just to be sure, forgot to test the nitrate so done that now reading about 15 I know it's often 20 out of the tap so this would be about normal, have ordered some Polyfilter as don't currently have any, would bad water cause this bleeding at base of fins and would it damage the gills as a lot of them are rapid breathing despite there being plenty of surface movement, have lost another 4 so far but most show at least some symptoms, even those without the bleeding or fungus have still died though

Tbh I can’t see any treatment working. Myxazin is a five day course so you’d have seen improvement by now.

I would have expected every tank to be affected if you changed them all, but Barbs are very intolerant of most toxins so it’s possible there’s something in the water that other tanks are coping with better.

All the disease symptoms will be ‘secondary’. It’s the water that kills them, not the diseases.
I don't keep fish, I keep water. Water keeps fish.
Top

Looks great. What type of rock are you using? I plan to do some sort of rock formation once I get my new aquarium running.
Top
Post Reply
36 posts