Hope you both have a great day.

to both of you

Back to Basics
Back 2 Basics
Fr499y’s shrimp tank

Happy birthday to you both.

Have a great day both!

WARNING - DO NOT BREED, FEED OR PET THE PUDDLE!

Happy Birthday to the Vale!s.

Thank you all very much. I think this one's rather a 'biggie' : if my maths is correct, I'm beginning my 71st orbit of the sun in eight minutes' time (as I type this) ; and Mrs V! should have retired today. {Edit : I've just seen the birthday announcements on the front page and it seems my maths is awry as usual! I will copy-and-paste the foregoing in a year's time then!}

I've been quiescent for quite some time. In fact earlier in the year I lost my mojo almost completely. Apart from adding food and checking some base parameters fairly regularly, I didn't do anything whatsoever to any of my tanks for five months. They were remarkably stable throughout, with the exception of Sheba 1(Betta coccina) and Sheba 3 (Chocolate Gourami & Sundadanio axelrodi aka Neon Blue Rasbora) in which pH rose to 7.2 and 7.1, and conductivity rose to around 210uS and 160uS respectively.

Now that I've found my mojo cowering in a dusty corner I'm getting back on track and, this morning, have even started a new project ... 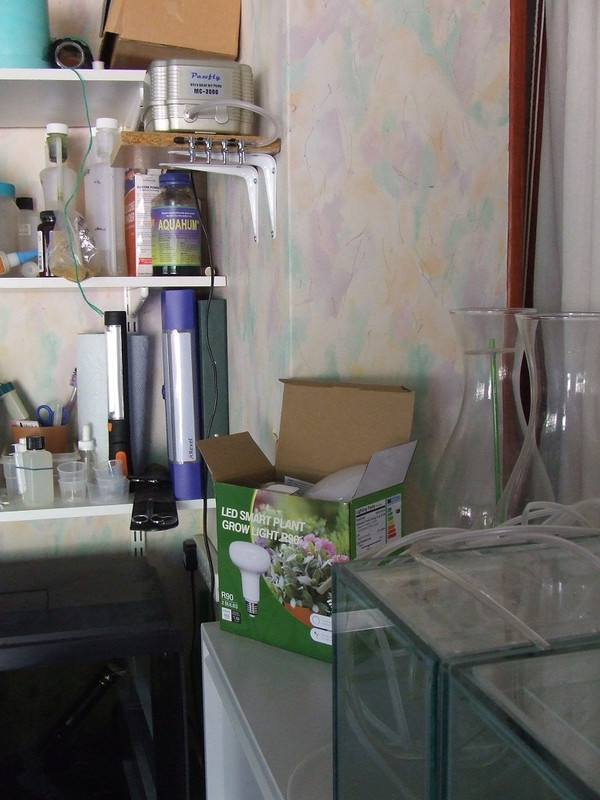 ... or to be more precise, I'm resurrecting an old project with hope of making improvements over its previous incarnation. Those grow lights that I came across serendipitously look potentially interesting for more than just my project. If you haven't come across them they're 'smart bulbs' in that they're controllable (daily timer, intensity) via an app. I can see me using one (or two) in a clip-on bulb holder as a cheaper alternative to a pukka aquarium light unit for a small/medium tank. Eventually I'll measure the light intensity at different depths and report back if it looks promising water-penetration-wise.

I've also, at last, sorted the Eirmotus tank. Due to its history and my general inability to get every last fish out of a tank when necessary, its left-hand compartment had Eirmotus and Hovering Loach in it - the latter representing a complete-eviction failure as described. Its right-hand compartment was supposed to hold a pair of Apistos (honsloi) but they had been joined by both Eirmotus and Hovering Loach from the other side : at some point the sponge 'plug' that prevents free travel had become dislodged. I reckoned I'd lost a couple of the long-in-the-tooth Eirmotus during my hiatus but I found two new ones whilst defoliating their space. I hadn't seen the female honsloi for some time. My male Apistos have a habit of harassing singleton females to death (I have an A. piaroa that has done the same) and it has always seemed generally quite difficult to buy a number of females so that at least small harems can be maintained when appropriate. Anyway, when it was the right-hand compartment's turn to be defoilated I discovered two new females - I'm pretty certain due to their size that neither is the original female. Very puzzling!