I've decided its time to combat the green and hair algae that's starting to build up in my tank. Its not too bad at the moment but I recon it will get worse if I don't do something about it. Apart from using 50% RO for water changes, using nitrate and phosphate remover pads, low lighting, and diet feeding I thought I'd ask your take on the benefit of mangrove plants. Are they worth considering? Any other suggestions to rid this stuff would be greatly appreciated.
Top

Nope. Slowest growing plants you’ll ever have the pleasure of owning and do little to impact! If it’s marine then macro algae’s in a refugium is the way to go. If it’s freshwater then large fastest growing stem plants you can find.
Back to Basics
Back 2 Basics
Fr499y’s shrimp tank

Algae can be caused by numerous things such as a too long a light period, too powerful lights and even over-feeding. Even if you have a planted aquarium you may be adding too much nutrients for the plants.
The best way to deal with issues (such as algae) is to find the cause and deal with it and not to throw in something in an attempt to combat the issue.

I had an algae issue (scenario) and my first thought was lighting. I cut back the lighting period to 7 hours and to when I was at home.
If you're home say from 5.00pm to 11.00pm then have the lights on then, the fish don't need lights but we do to see the fish.
Although it improved a little I looked for additional causes.
I also have live plants and was feeding the plants as per the instructions, it was too much, so I cut back (50%) on the amount of nutrients I was adding for the plants. This also helped.
Then I noticed algae was still near the front of the aquarium and on the front aquarium glass.
This happens to be where I feed the fish, so I cut back on the amount of fish feed I was putting in. Again this also helped.
In this scenario then the cause was a combination of too much light, too many nutrients for the plants and over-feeding the fish.

Some newcomers to the hobby will consult the internet or ask at a LFS. The general reply will be "use this product" after all the LFS wants a sale.
Adding chemicals does not fix the cause although it may temporarily fix or mask the issue.

Going by your replies I can see there are various experiments I can try that may reduce the growth of algae. The following will give you some idea of my set up and the routine management of my tank. 4ft tank (actual volume 140lt). Ammonia, Nitrite, Nitrate all zero. PH7 GH14, KH6 Not tested for Phosphate or Oxygen. Live plants get fed with 2ml of liquid nutrients and 2ml liquid carbon every other day. Tank houses 13 Guppies and 14 Neons. Lighting:- Blue light 2.5hrs from 0800 to 1030. Soft white light 7hrs from 1030 to 1730. Blue light again 4hrs from 1730 to 2130. Fish get fed twice a day with a mixture of crushed dry food see amount shown in photo. Hopefully you can also see the green algae at various stages on the rocks and hair algae on plant leaves, So, no doubt there is room for improvement and lessons to be learnt. 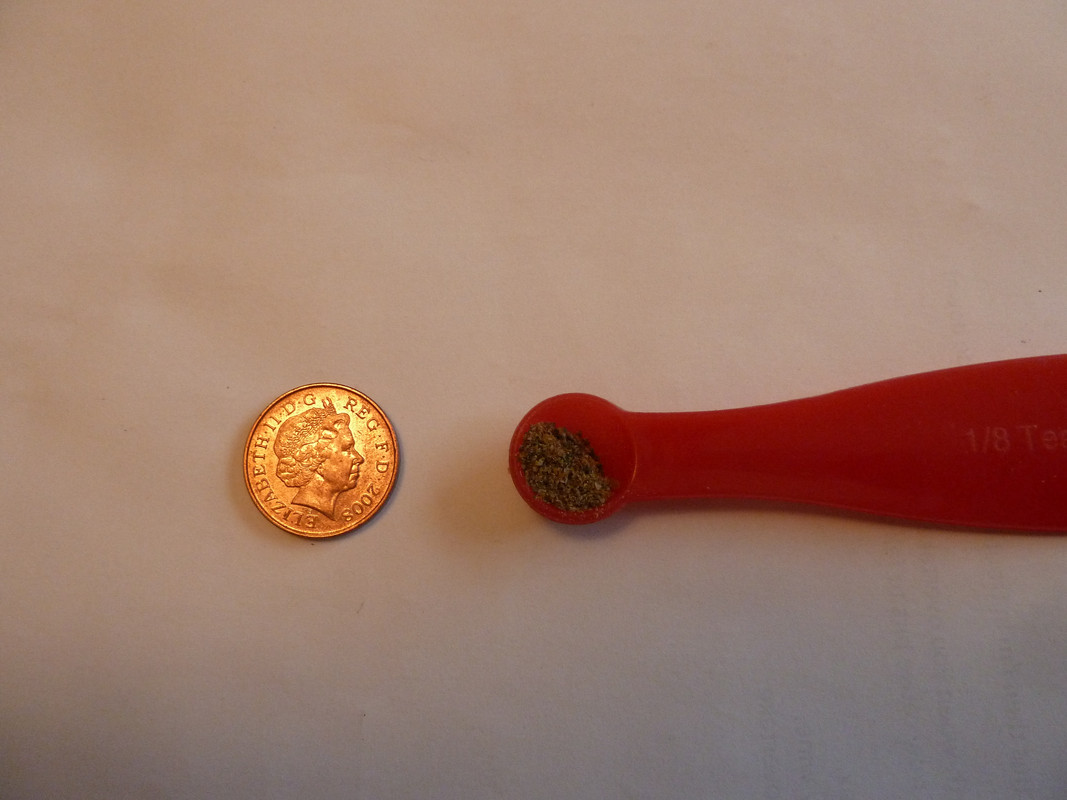 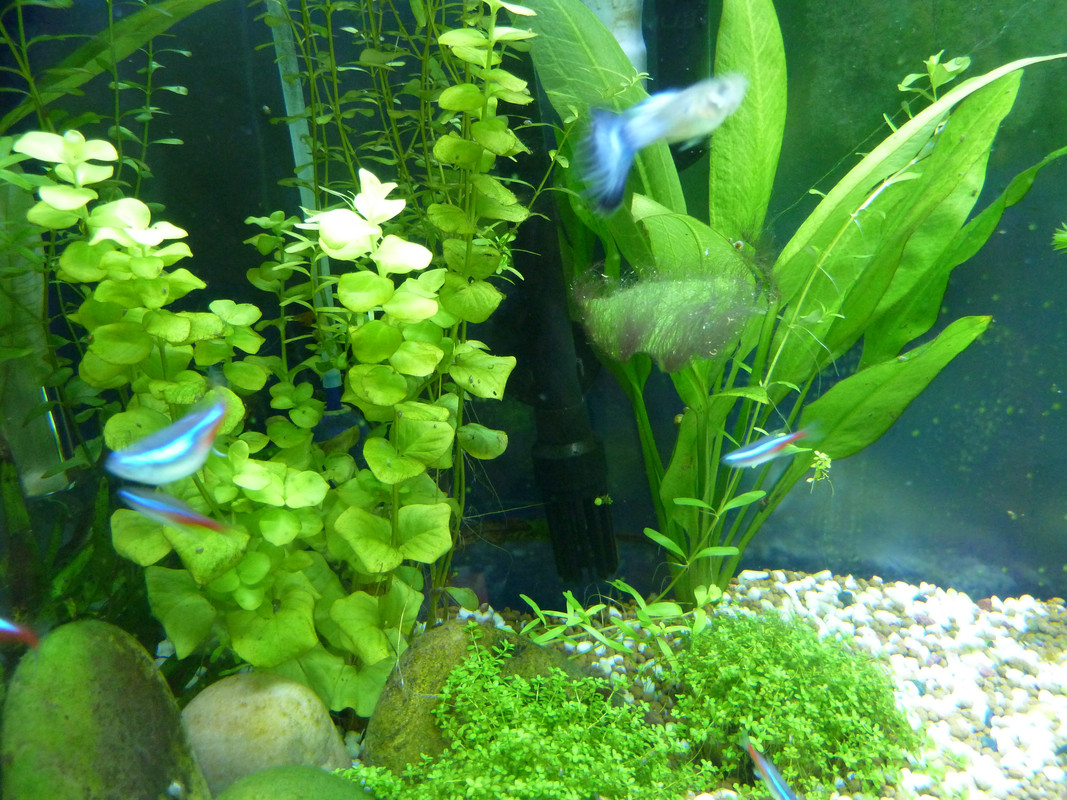 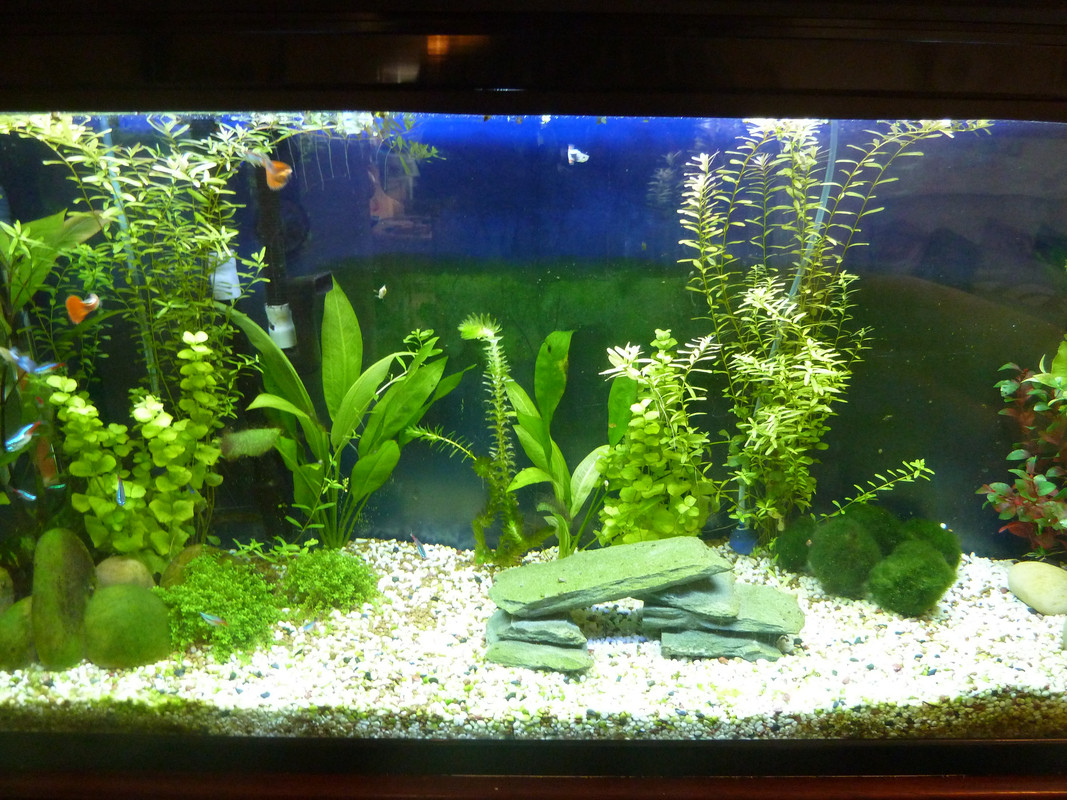 Too much blue light will encourage algae.
Plants do require some blue light but red light is more important for photosynthesis.
Is the white light a day light with the full spectrum?
Your overall lighting period is 8.00am to 9.30pm, that is too long.
Only have the lights on for when you are home, example 4.00pm to 10.00pm, fish don't need light but we do to see and appreciate the fish.
Plants do need light but 13.5 hours is far too long.
Experiment with reducing the blue light and reducing the overall lighting period, I'm sure that will help with any algae issues.